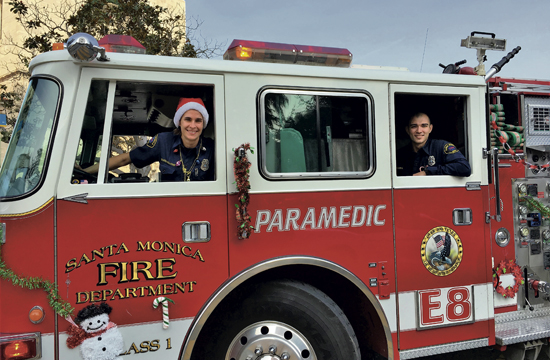 “About 24 years ago, the police and fire associations wanted to reach out to the community and show their appreciation for the support that we get from our community members,” said Lauralee Asch, who is in charge of Community Affairs for the Santa Monica Police Department, about how the event originally began.

In the past, the Candy Cane Drive would encompass the two-day weekend, but the participating public safety workers have since scheduled all of their stops into a single day, in which they bring their cavalcade of police and fire vehicles, decked out in Holiday accoutrements, all over the Westside. The full list of stops included Douglas Park, Christine Reed Park, the Third Street Promenade, Virginia Avenue Park, Marine Park and Clover Park.

Many of the participating public safety officers, all of whom were off-duty during the day’s event, brought their families along with them.

“They’re here with their family members and kids to show them the concept of giving back to the community,” said Asch.

Families visiting the travelling Candy Cane Drive could meet and pose with public safety officers next to vehicles both current and old, as well as meet and take photographs with Santa, with whom many children were delighted to share their Holiday wishes.

“This is a great day. We help start the season off for us and the community in a fun and joyous way,” said Asch.