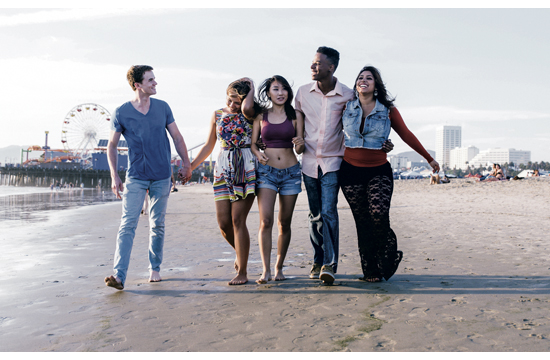 As Terry Bozzio cited in her 80’s musical essay “Walkin’ in LA”… nobody does that. Apparently, back then anyhow, people just didn’t walk places. Among the sights you would not see back then, according to pop sociologist Bozzio, were “a cop walking the beat/you only see them driving on the street/you won’t see a kid walkin’ home from school/their mothers pick ‘em up in a car pool.”

Perhaps there was some perceived danger in being out on foot; after all, Bozzio’s band had the cautionary name “Missing Persons.” But here in Santa Monica, we can take a stroll somewhere and likely not run into the Hillside Strangler or even flesh-eating zombies as television would have you believe. Yogurt-eating zombies, maybe.

And so I humbly implore you to find an excuse to go out for a walk in our city over this holiday season. Or any time of the year. It’s just that right now there can be a lot of driving, stopping, shopping, and reentering your vehicle. That activity, even powered as it is by the love inherent in holiday gift giving, can be a little soul draining. So pausing to take a walk, perhaps even leaving your wristwatch and your phone at home, can be an almost zen experience and a great way to appreciate our city.

I think setting a little goal can be helpful. Remarkably, there are many who live here who haven’t been to the beach in quite some time. Never mind a full-body commune with sand between your toes and the waves washing over at least the lower half of your legs…just tell yourself you’re going to walk to the pier and back. And then inhale the air, feel the sun… bond with it, people.

But before my bongo drums are repossessed, let me point out that right now the Promenade is in its holiday glory and adjacent to the ICE experience at 5th and Arizona. Of the many things touted as “experiences”, this one actually is. Because people ice skating outdoors in downtown Santa Monica is something special, yet requires no virtual reality goggles. It’s kids and parents struggling to ice skate, and it’s human and it’s fun. See what people used to do for entertainment before “entertainment” became an electronic thing in a black box haunting our homes.

Because I live adjacent to it, I am going to strongly recommend a walk down Santa Monica’s Main Street over the holidays. Much as cell phone stores and nail salons keep trying to suck the charm out of this area, it’s still a very pleasant thing to walk from, say, Rose and Main and end up downtown, having passed such historical locations as Dogtown, City Hall, the Civic Center, and the Rand Corporation… where I’m sure they’re up to something even as we speak.

And don’t rule out strolling the streets of your own neighborhood to take in your neighbor’s holiday decoration efforts. Often there’s a lot of grunting, nailing, swearing and climbing of ladders involved in providing those twinkling light displays. The least one can do is take a moment to appreciate your neighbor’s efforts.

Just this past week, we were reminded again that there are those on our tiny planet who want to strike fear into our hearts about being out and even attending public gatherings. The implications of this change in modern life are so disheartening I hesitate to give them possible any possible credence by bringing them up. I do not indulge the emotion that we need to live openly because to do otherwise allows the terrorists to “win” because terrorism always loses. It has no moral or intellectual support and remains what it is: A disgusting vulgarity against life and the concept of civilization.

Taking a walk in Santa Monica bears no real political or philosophical implications. But not taking a walk over the holidays, perhaps with family that has traveled far to be with you, might have some sort of implication. Say, for example, your fear of exercise. There’s something very pleasant about slowing down and being out with humankind at the very time of the year that we celebrate humanity and peace. So, I’m telling you: Merry Christmas! Now, take a hike.