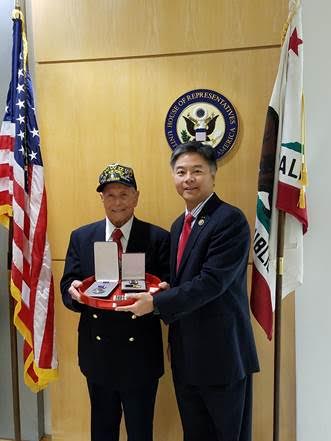 Congressman Ted W. Lieu (D-Los Angeles County) presented Sergeant Albert Erd (93) with replacement medals for ones that were stolen many years ago.

Sergeant Erd beamed with pride as he recounted to Congressman Lieu his service in the United States Army Air Corps during World War II, which included being a radio operator on the B-17 Flying Fortress during the European Campaign that flew over Germany and Romania. He was also a gunner, completing 50 missions in total.
Just in time for the holiday season, Sergeant Erd, a Redondo Beach resident, got his wish of receiving the replacement medals.  He stated that it was not until a recent heart attack that he discussed trying to retrieve them.

Sergeant Erd’s grandson Louie Schwartz, also a military veteran, contacted the office of Congressman Lieu in hopes of obtaining replacement medals for his grandfather. Congressman Lieu’s office was able to work with the Department of the Army to replace the medals.

Sergeant Erd’s list of impressive military awards and decorations are as follows:

At a private meeting, Congressman Lieu presented the medals to Sergeant Erd, who was surrounded by his wife and family.

Congressman Lieu stated the following after the presentation:

“It was a great honor to meet and present the medals to Sergeant Erd. He sacrificed so much for our country and deserves to have these medals, which memorialize his selfless acts of courage.”