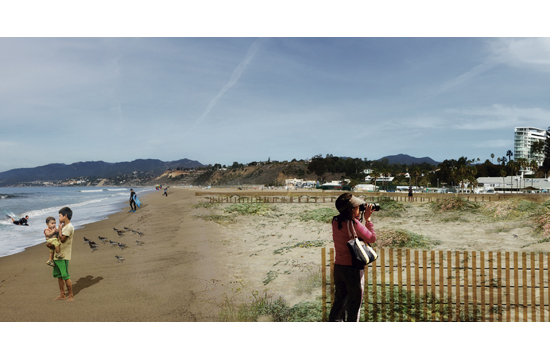 The Bay Foundation, in partnership with the City of Santa Monica, announced its Santa Monica Beach Restoration Pilot Project on December 1.

The purpose of the project is to transform an approximately three-acre section of existing sandy beach into a coastal ecosystem and to address coastal hazard risks while protecting and enhancing resources such as public beach access and recreation, natural shoreline habitat and aesthetic values, according to the Foundation. The installation will take three to four weeks beginning in December.

“The most exciting part of this project for me is the chance to show people what a different kind of beach can look like and what it can actually do,” Tom Ford, executive director of The Bay Foundation, said. “This project may clearly demonstrate that the beach can again be a place for wildlife and people while providing protection from sea level rise in a very cost effective manner.”

The designated area for the project is ocean-ward of the bike path near the water, parallel to the Beach Club and about a mile and a half north of the Santa Monica Pier.

The pilot project will attempt to transform a highly impacted beach by seeding with native coastal strand species, such as flowering sand verbena and beach evening primrose. The project will also evaluate increased protection from sea level rise and erosion for coastal infrastructure and residences while also providing a vital refuge for coastal vegetation species, invertebrates and birds.

The project is also meant to offer a unique beach aesthetic for the region.

“We believe that the iconic beaches of Santa Monica will be a beautiful and important location to test this restoration project,” Karina Johnston, Director of The Bay Foundation’s Watershed Programs, said.

“The City of Santa Monica, California State Parks and the folks neighboring the project have been so welcoming, it’s a very encouraging start,” Ford said. “I can’t think of a better way to ring in the New Year.”