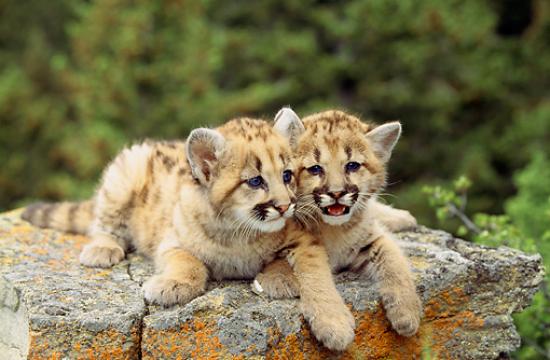 The mountain lion believed to have killed more than 50 farm animals this summer and fall in the mountains above Malibu may be captured and sent to the Wildlife Way Station, instead of being shot, a lawyer for a rancher said tonight.

However, animal rights activists said putting P-45 into a cage for the rest of his life is a fate worse than being shot.

An attorney for the ranch owner, Reid Breitman, said the animal would not be shot immediately, and his client Victoria von Turling wants P-45’s life saved.

“Victoria wants it relocated, and we’ve arranged for the Wildlife Way Station to accept the animal,” Breitman said at a meeting called by the National Park Service.

“I understand that there is a lot of opposition to that,” Breitman said, as cries of no arose from the overflow crowd. “Some people even think it’s better to have it dead than relocated, some people have actually said that, and we think it’s horrible.”

The Park Service’s community meeting was scheduled weeks ago to help ranchers living within park boundaries in the Santa Monica Mountains learn to keep their sheep, alpaca and goats safely co-existing with the 10-15 mountain lions that live in the mountains between Malibu and the Ventura (101) Freeway.

An overflow crowd of more than 300 filled a park service maintenance barn and spilled outside, with most cheering catcalls from the audience demanding that sheep and other livestock foreign to the mountains be given lesser priority than the native cougars.

After 10 alpaca and a goat were killed last weekend, apparently by P-45, state game wardens under state law were requited to issue a “depradation permit” — a 10-day hunting license to kill the predator.

A handful of vociferous animal rights demonstrators, some from People for the Responsible Treatment of Animals, jeered at park rangers and game wardens who explained that California law requires issuing a kill permit when a wild animal damages property.

Breitman drew jeers when he said “the issue here is that the Department of Fish and Wildlife, under the law, they can issue a permit to kill. But it is not so easy for them to issue a permit to capture and relocate.”

Park Service biologist Seth Riley showed the crowd satellite data from P- 45 and other studied cougars, and stressed that the animals avoid people and ranches.

Riley also said that in a dozen years of study, with tens of thousands of people hiking or riding horses in the Santa Monica Mountains, there have been no attacks on people.

A volunteer from the Mountain Lion Foundation urged the animal rights activists to work with the animal owners living in the Santa Monica Mountains.

“We don’t need to demonize,” said Leah Sturgis, who lives in Topanga Canyon. “Nobody wants to kill these lions.

We met with some of the ranchers today and they have been very cooperative and very kind and they invited us to into their land to help them protect their their livestock.”

Some of the animal rights activists were met with catcalls from ranchers, when they claimed the local mountain lions were endangered.

“They are not endangered, there are lots of them,” one man shouted.