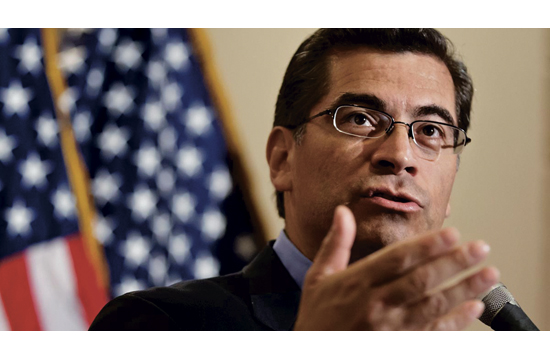 All through his career, unpredictability has been the hallmark of Gov. Jerry Brown, and he did it again by choosing 12-term Democratic Rep. Xavier Becerra of Los Angeles as California’s next attorney general.

With his confirmation by a Democratic-controlled Legislature completely certain, Becerra will force other major politicians to look over their shoulders; some are likely to change their longstanding plans. He also moves the state beyond an era of substantial domination by a clique of San Francisco-area Democrats that has included U.S. Sens. Dianne Feinstein and Barbara Boxer, Lt. Gov. Gavin Newsom, outgoing Attorney General and new U.S. Sen. Kamala Harris and Brown himself, a former Oakland mayor.

Becerra, 58, instantly becomes California’s top-ranking Latino politico. He’s not saying, but he could run for election to his new office on his own in 2018, or he could run for governor against the declared likes of Democrats Newsom, former Los Angeles Mayor Antonio Villaraigosa, state Treasurer John Chiang and possibly so-far undeclared Republicans like San Diego Mayor Kevin Faulconer or outgoing Fresno Mayor Ashley Swearengin.

Former San Francisco Mayor Newsom led the only major public poll conducted so far on that race, with the two Republicans placing second and third. Becerra, until now the Democrats’ No. 3 figure in the House, would shake up that race enormously because of his longtime popularity among Latino voters.

But he insists he’s not looking ahead. “I’ll be gratified if I can make sure I can get confirmed to be the next attorney general,” he said in a television appearance just after Brown announced his choice to succeed Harris when she moves to the Senate. “Right now, I’m thrilled the governor would put this confidence in me to be the next AG.”

The choice of Becerra was a slap at two-term state Insurance Commissioner Dave Jones, a firm consumer-rights advocate who has clashed occasionally with Brown over regulation of health insurance companies.

Jones, so far the only declared 2018 candidate for attorney general, could react in several ways. Although he’s held his current job six years, he could run for reelection, insurance commissioner being the only statewide office without a two-term limit. Or the former assemblyman from Sacramento could do what Newsom did in 2010 after it became clear he had no chance against Brown in that year’s Democratic primary race for governor – settle for becoming lieutenant governor.

For sure, Jones won’t switch from his run for attorney general until he knows Becerra’s plans. For Becerra has long coveted a seat in the Senate, and might have run for the one Harris will soon take, except that Harris entered that run the moment Boxer announced her retirement early last year. She quickly corralled support from every major Democratic officeholder in the state. So Becerra stayed in Congress until Brown tapped him early this month.

Should Feinstein decide sometime in the next two years to retire from the Senate after four-plus terms, Becerra might seek her job.

But if Becerra and Jones both run for attorney general, the two popular and accomplished figures are likely to split the Democratic vote in the 2018 rendition of California’s top two primary, possibly producing a November runoff between two Democrats, as happened this year when Harris easily beat Orange County Congresswoman Loretta Sanchez.

It’s also possible that if Becerra enters the gubernatorial field after serving a year or so, he could force one or two of the other prominent Democrats running to drop out – or risk splintering the Democratic vote so badly that Faulconer and Swearengin end up in an all-Republican runoff. That sort of things has happened twice in lesser contests. The top-two system makes this possible even though where Democrats now hold every state major office, plus two-thirds majorities in both houses of the Legislature.

All of which means one choice by Jerry Brown has quickly shaken up California politics more than any event since Gray Davis was recalled in 2003.