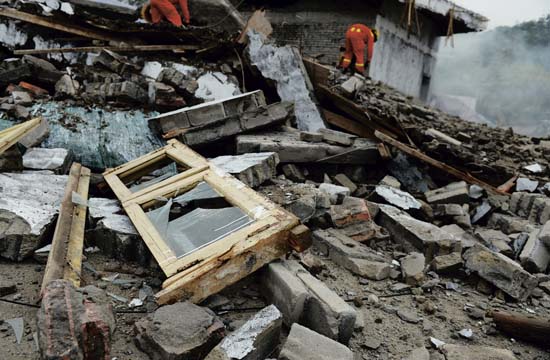 Earthquakes here are inevitable. Not as much as traffic on the 405, but still we know they are coming and hopefully most of us have a box of supplies somewhere that includes flashlights, a small radio for information, batteries, canned foods, some cash… well, the more you dwell on it the more you think of that could go into that box. I’ve often wondered if I shouldn’t include a 400 page-plus novel to read on the likelihood that there will be some amount of sitting and waiting following a hopefully not deadly shaker. “How did we do in the quake? Well, our house is a ruin, but I’m almost halfway through “The Broom of the System.”

Oh if there were something funny about it, but fear of “The Big One” never quite goes away. It haunts, and properly so. Which is why Santa Monica is among several cities including Beverly Hills and West Hollywood that are looking to expand retrofitting as a follow-up to L.A. Mayor Eric Garcetti’s campaign launched last year to create the nation’s toughest earthquake safety law.

An LA Times article from Nov. 25 explains that, in the case of Beverly Hills officials, retrofitting is viewed as not just a safety concern but a financial priority: They want to make sure their city is back and running as soon as possible following a major quake. In the same article, West Hollywood City Councilman John Duran points out that while West Hollywood didn’t suffer major damage in the 1994 Northridge quake they might not be so lucky next time.

There are of course dimensions of work and cost. Santa Monica has quite few structures that are often referred to as soft-story buildings. Many of them are the charming two and three story buildings that have covered parking spaces on the ground level…and not much structural support holding up the rest of the building. Retrofitting concrete structures is complicated, but in both cases experts know where the fatal flaws are. This isn’t a question of whether the challenge and the danger are clear to us. It’s about how soon and if our city is going to meet that challenge.

Santa Monica has had laws requiring retrofits since the 1990’s, but the LA Times reports they have not been rigorously enforced. A 2013 LA Times story cited that a top Santa Monica city official could not even find an old list of buildings that were at risk.

Well, gosh, this won’t do. We’re not going to be the Silicon Beach and a first world city if we have housing in ruins and deaths following a quake that make us look more like China with its lax construction codes and resulting collapsing school and commercial buildings following a quake. Apparently agreeing with me is Salvador Valles, assistant director of Santa Monica’s Planning and Community Development Department who is quoted in the LA Times as saying that our city now intends to have “a more proactive approach than it was before, in the hopes we can actually get these buildings retrofitted.”

From that same LA Times article: “Santa Monica estimates that there are more than 2,200 buildings that will need evaluation for retrofit, including more than 1,800 soft-story buildings and more that 220 brick buildings. Officials also counted 73 concrete buildings and 71 steel-frame buildings.” Whew! There is a lot to do, but what alternative do we have?

I can clearly recall a time in my youth when some neighbors were rumored to be building a bomb shelter and everyone wondered if they should be doing the same. Or, some reasoned, we could just hope that the worst didn’t happen. Living on the shifting plates on which Southern California is built, we may not have the luxury of that hope.