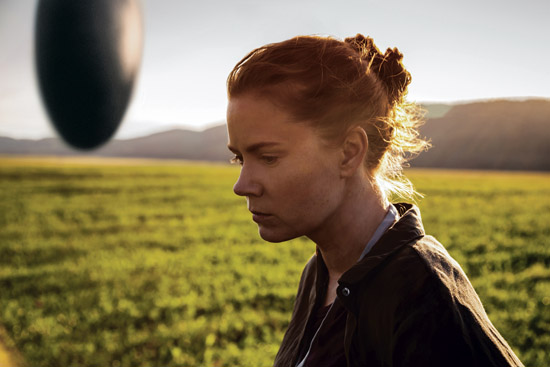 Extraterrestrials in all sizes and shapes have been coming to Earth since the silent days of movies. They were a common occurrence in the 50s, arriving to save the planet in films like “The Day the Earth Stood Still” and destroy it “War of the Worlds.” More recently, we have become accustomed to benign creatures like E.T. and the ravenous primordials in the “Alien” series.

So it no small feat that director Denis Villenueve (“Prisoners”) and

writer Eric Heisserer (“The Thing”) have managed to reimagine the invaders-from-space genre as a metaphysical thriller in “Arrival.” Unlike like “Independence Day” where menacing spacecraft hover over the world’s major cities, “Arrival” begins as 12 oval-shaped, almost ethereal ships arrive and float just above the earth’s surface at seemingly random spots around the globe. As is always the question when strangers from another universe come calling, who are they and what do they want from us?

Apparently they have something to say but the foghorn-like blasts are indecipherable until Colonel Weber (Forest Whitaker) recruits linguistics expert Dr. Louise Banks (Amy Adams) and astrophysicist Ian Donnelly (Jeremy Renner) and takes them to a Montana prairie to crack the code. With all their senses and intellect open to the mysteries ahead, Banks and Donnelly are beamed up to the mother ship and there, behind a glass wall, the creatures appear at designated times of the day. Emerging out of a thick fog are two octopus-looking creatures who create splotches of black images on the wall.

Much of the film is devoted to unraveling what this lyrical space-writing means as the Russians, Chinese and other teams try to do the same working inside the other ships. Of course, the world being what it is, this leads to international tensions rather than cooperation and the Chinese as well as a militant flank in this country advocate for a preemptive attack. These visitors from afar bring out the best and worst in people; Dr. Banks represents the best.

Adams invests her character with a wide-eyed curiosity and innate goodness as she comes face-face with the mysteries of the universe. And Renner, as an unassuming scientist who is a bit lost when it comes to interacting with people, also projects a human decency that’s hard to fake. The performances, along with an evocative soundtrack and visuals effects that are more delicate than bombastic, enable the audience to suspend its disbelief—the essential requirement of all successful fantasy films. This is one of the few movies in recent memory that succeeds in creating an emersion in its own reality.

The pieces of this cosmic puzzle all come together, more or less, with a new understanding of man’s place in the universe. Events that have happened and events that have yet to happen to Banks’ – marriage, a great loss, and love for her child – are revealed to be simultaneously part of the great continuum of all existence – both human and other-worldly.