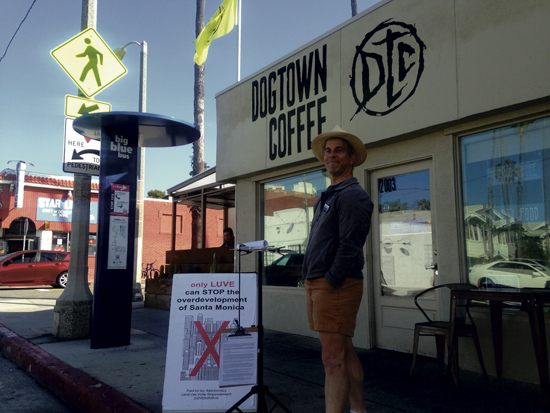 A small contingent of grassroots resident activists gathered on the steps of Santa Monica City Hall this morning to submit to the City two stacks of boxes filled with signed Land Use Voter Empowerment (LUVE) initiative petitions.

The LUVE initiative has seen city streets, shopping malls, schools and public events dotted with LUVE volunteer signature gatherers for the past eight weeks, an effort that has collected 10,000 signed supporters, according to proponents.

The LUVE initiative was written by Armen Melkonians and Tricia Crane from Residocracy.org, an online ‘direct democracy advocacy tool’ for residents. Coincidentally, Residocracy was formed to fight the Santa Monica City Council-approved Hines project (which it did successfully, overturning the approval), the date of the approval was two years ago, today.

LUVE was tasked with gathering a total of 6,430 signatures to secure a place on the November 8 ballot.

“The committee for the LUVE initiative did its own validity verification and is confident that the 10,000 signatures they are submitting are more than the number needed to qualify the initiative for the ballot,” Crane explained.

Now submitted to Santa Monica’s City Clerk’s office, the signed petitions will be sent to the Los Angeles County Registrar for verification.

While garnering a groundswell of support, LUVE has understandably drawn opposition from sections of the community.

“The Chamber Board unanimously voted to oppose the LUVE Initiative,” said Santa Monica Chamber of Commerce President Laurel Rosen. “The fact is, LUVE would have the opposite effect that its signature gatherers promised. LUVE would make traffic worse, and housing less affordable. It would also place an undue burden on local businesses, non-profits, schools, and places of worship.” An Ad Hoc committee has been established by the Chamber to gather data to back up their statements.

“The Santa Monica Next Steering Committee, all of whom are residents of Santa Monica save our publisher, instructed staff to write an editorial opposing the LUVE initiative because of the concerns they had that the initiative, whether it intends to or not, will cripple Santa Monica’s ability to add housing, and especially affordable housing, during a regional and local housing crisis,” said Santa Monica Next Editor Jason Islas.

LUVE is supported by six neighborhood associations, Santa Monica Coalition for a Livable City (SMCLC), the Santa Monica Architects for a Responsible Tomorrow (S.M.art), and many civic leaders, including PTA members and the Chair of the Santa Monica Housing Commission.

“Residents feel disenfranchised by the possibility of more excess commercial development in Santa Monica. The passage of this measure on the November ballot will ensure that large development decisions are made between developers and our residents and not just a developer and the city council, SMa.r.t’s Phil Brock told The Mirror.

New resident groups Downtown Neighborhood Association (DNA), and NOW Santa Monica, were contacted for comment, but did not reply.

Editor’s Note: Despite the groundswell of grassroots’ support, the LUVE Initiative lost at the Nov. 8 ballot. Since then Santa Monica City Councilmembers Kevin McKeown and Gleam Davis proposed Dec. 6 a similar direction to staff during a City Council meeting to, “explore the procedural steps necessary to establish voter approval requirements for development exceeding the general plan, the adopted zoning code, or some other specified threshold, and/or require a super-majority Council vote on projects exceeding specified parameters, and return to Council and the community with information for possible future actions, including policy changes, resolutions, ordinances, and Council-initiated ballot measures.” Since the Nov. 8 vote, the majority financial backer of the anti-LUVE push, Neil Shekhter from NMS properties, has been called out in court for fraud-related activities, with questions surfacing on the funding PAC behind both City Council election literature and elected City Council candidates who received NMS support.