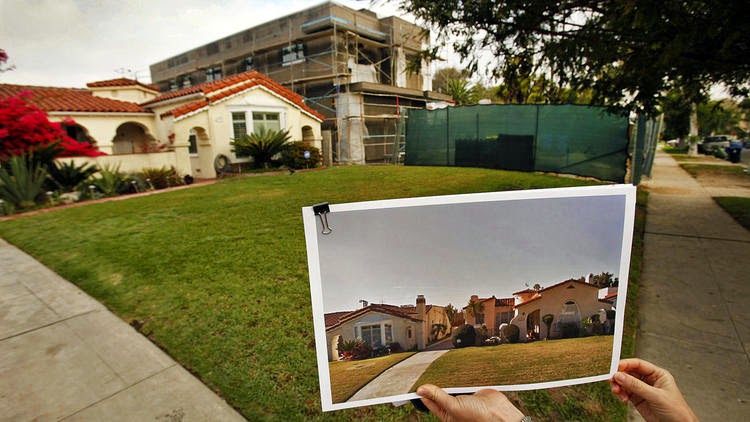 In the 1980s, Santa Monica’s single family zoning code was rewritten and modified to prevent the “mansionization” of small homes on small lots, from being built out to the maximum allowable height without setbacks and articulation of the facades.

The revised codes were written with the intent to restrict maximum height vertical walls being built along the side yard, for example, blocking sunlight and blue sky from the neighboring home. Side yard setbacks were widened as height increased to assure adequate separation for light and air. Homes had to be articulated, stepped back after a certain number of feet or percent of wall length, to minimize negative impacts on their neighbors’ access to air and sun.

When we consider those design criteria for single-family residences, it seems logical that it should apply to the commercial sector too. Looking at recently approved, and built, commercial mixed use projects, we find little or no “front yard” set back (otherwise known as wider sidewalks). We see no new paseos between newly-built commercial buildings, or articulated facades that allow sun and air to reach either the passageways or the occupants of the buildings.

We see instead boxes that maximize their site with some (usually repetitive) breaks along the front elevation but little concern for the side elevations that can block access to light and air. Lincoln Boulevard, especially from the freeway north, will soon be the ugly poster child of wall to wall mixed use five-seven story buildings, a testament not to good planning and design but to developer greed and the politicians who allow it.

Santa Monica is a beach community that can be likened to Central Park in New York. We are a natural resource of fresh cool air and sun for the greater region. People come to Santa Monica to seek relief in the summer from the oppressive heat of the valleys, the downtown metro areas and the east side. It is time to recognize that and step away from the notion that Santa Monica is merely a developers’ golden goose that is to be built out to the maximum. Can you imagine infilling Central Park with high-rise “walkable” neighborhoods? New Yorkers wouldn’t stand for it. Why do we?

The sooner we treat Santa Monica as our home, with quality of life and sustainability of the environment as the primary motivation for responsible growth and development, the healthier and more functional our home will become, for all of us who live here and for those we serve in the greater region, including our millions of tourists per year, crucial to our economic well-being.

We continually hear from those who propose more and more development that it is all about a shortage of affordable housing. Close to 3,000 units approved and in the pipeline has not produced affordable housing. It’s a myth, a con. The new housing units will rent very high, whatever the market will bear, which in fact will have the opposite effect, of raising rent ceilings in the adjacent neighborhoods.

“Affordable” is a buzz word that moves large scale commercial projects through the approval process with the promise of a few token so-called affordable units. Certain council members and planning commissioners seem very willing to ignore the negative impacts of these large scale projects, as long as there are a few units that are called “affordable.”

The commercial building sector needs to be similarly restricted from “mansionization,” of our downtown and boulevards, much as our single family residences are restricted, for all the same reasons: light, air, sustainability, impact on adjacencies – quality of life. We have a responsibility we’re not currently fulfilling, to protect our beachfront environment, and the relief our low rise beach town provides to the greater region. People come to enjoy our beaches, blue skies and fresh ocean air, not to visit just another dense, congested, traffic clogged, downtown metropolis with a Disney-esque promenade soon to be buried in the shadows of the tall condo/hotel structures contemplated for Ocean Ave.

Just say no to the “mansionization” of Santa Monica.