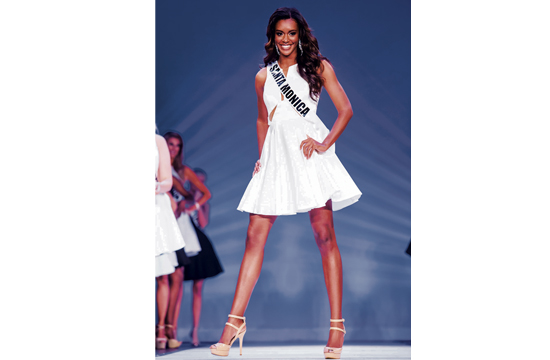 Charismatic, confident, and glamorous, 20-year-old India Williams represents the state as Miss California USA 2017, as well as Miss Santa Monica 2017. Williams, an only child, was born and raised in Lafayette, California. Although she has devoted a great deal of time to pageantry, Williams is more than a pretty face beneath a sash. Now a junior at Loyola Marymount University (LMU), Williams is passionate about studying business and using her title as a platform for advocating her entrepreneurial beliefs.

At a young age, Williams was signed with modeling agency Stars Model Management in San Francisco and participated in various runway shows and campaigns, which inspired her transition to pageantry. Williams was captain of the varsity cheerleading squad at Acalanes High School in Lafayette, and described her high school experience as good preparation for LMU.

She began her journey in pageantry by reading online about the Miss California Teen USA pageant in 2014, and decided to enter. Although she did not place that year or the following year, Williams said she enjoyed the process of making friends and trying something new.

“I felt like it was going to be a good experience for me, so I went with it,” Williams told The Mirror. “It was definitely a tough road to finally win [Miss California USA], but it feels really rewarding.”

Williams then moved on to compete in the Miss Santa Monica pageant, working with director Kirsten Bradford, who is responsible for coaching the past four Miss California USA’s (including Williams) and runs a coaching service in Santa Monica.

During her competition phase in Santa Monica, Williams spent time walking by the beach and eating at local restaurants, particularly Del Frisco’s Grille (her favorite) on Ocean Avenue.

“They’re so supportive every time I go in there, they’re very sweet, and they’ll bring me a dessert or something for being Miss Santa Monica,” Williams said. “I was really trying to be a part of the community since that was the city that I was representing.”

Following her victory in Santa Monica, Williams struck gold at the Miss California USA pageant. She participated in a three-part competition, the first being an interview by a panel of judges (followed by swimsuit and evening gown competitions.) Williams said her skills lie in the interview component.

“I gave them insight into my personality and what I could bring to the table, so I think that was definitely my strongest part of the competition,” Williams said.

In addition to preparing for the approaching Miss USA pageant over the summer, Williams is nurturing her entrepreneurial interests at LMU as well as outside of school. She credits her parents, who own their own company, for passing along the “entrepreneurial bug.” In spring 2016, she volunteered with the Incubator School, a public school in Los Angeles that promotes teaching entrepreneurial skills to middle school students.

“Something I’m really passionate about is bringing entrepreneurship to a younger audience,” Williams said. “I really think it’s important to teach children that there’s a way to make a living for themselves and be self-sufficient and independent.”