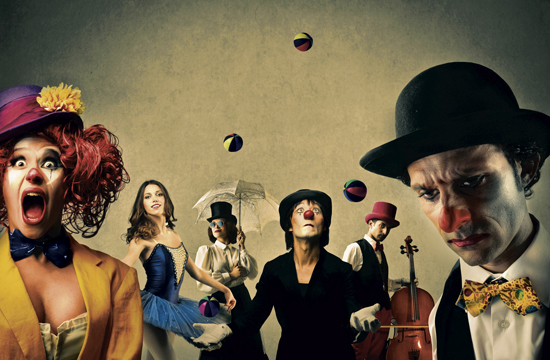 NOT A SPOILER: Let me first assure you that I have no intention of aligning the demise of the Ringling Brothers Barnum and Bailey Circus to the incoming White House administration. That’s an easy and lazy analogy that I’ve already read about a dozen times in various editorials and columns and in some ways it’s indicative of the desire in present-day media to create comparisons that are not helping us in any good way digest what’s coming in the next four years. With this caveat: Trump will remain, in conversations and political exchanges, the elephant in the room.

What actually interests me more about Ringling Brothers folding its tent is the passing of yet another admirable format for live entertainment utilizing real human talent and skills. I’m reminded of the way veteran entertainers used to mourn the passing of vaudeville. Not all that long ago, when you consider how the term “entertainment” has rushed through various incarnations so swiftly in our own lifetimes, human entertainers presented a live stage show with variety acts and live singing (sorry, Mariah Carey…) and that was plenty good in its time. Then came radio, followed by television where the earliest formats essentially revived vaudeville in the form of “The Ed Sullivan Show,” Milton Berle – yes, dammit, I’m old!

Taken loosely, the Internet has become a variety show but with growing concerns about how footage of a turtle dressed to look like Mitch McConnell placed up against actual news of mayhem and killing helps us in any way to grasp a sense of the present. Say what you want about the emerging angst about “fake news,” if you ever were lucky enough to see a full-bodied Ringling Brothers Circus show you knew at least that everything that you witnessing was in fact happening.

I remember as a child attending a circus with my parents and the impact was multi-sensory and terrific. While I of course agree that it’s as wrong to capture and train elephants to do tricks for us as it is to keep a whale captive for the same purpose, there was no denying the magnificence of those giant creatures in person. Alas, the imprisonment of elephants became more than a metaphor for how the sensibilities of a circus show were now beyond our ability to enjoy such a show knowing what we knew about what we were watching.

Thus live circus under a big top tent will be passing into history to appear only in books alongside vaudeville, early American string bands, and silent movies. I disagree that, despite its name, the Cirque du Soleil is the heir apparent to Ringling Brothers. There are just too many contrasts and differences. For one thing, Cirque du Soleil is an entertainment available only to those able to pony up the high price of a ticket. It is European and elite in its appeal. In most of its lifetime, the three-ring circus of old was built for and truly intended for the masses. Even our modern day usage of the word “circus” carries with it an implication that the ‘show’ we are referring to is available to everyone.

I’m not sure what it says that clowns – a staple of the old-school circuses – have become viewed as scary and threatening. One begins to get the idea that everything that has any whiff of antiquity or history must somehow be processed as archaic to the point of potentially being a threat. This column confesses that it has sometimes used the banjo as a symbol of backward thinking, when in fact the instrument is extremely difficult to master and requires musical skills that would give EDM synth programmers a challenge.

But the world turns and the things that used to thrill us, such as a man or woman sticking their head into the jaws of a tiger or lion to be rewarded with applause, now become quaint reminders of a day gone by. Still I’m going to point out that, whatever the circumstances of life for those magnificent creatures, they were real and the heads were real and sometimes bad things happened at a circus.

We used to experience exhilaration at the very idea of a man or woman traveling in outer space. Now you can hardly get an average citizen to tell you how many people are currently on board the International Space Station or whether they are running out of food and water because an automated rocket just failed to launch a payload into space.

I have every confidence that, soon enough, some of the experiences that used to be business as usual for live circuses will become just another program to play in your virtual reality headset. But what will be missing is the gumption of trapeze artists and daredevil motorcycle riders and the man that was fired out of a large canon. In their place we have synthesized war video games and the distractions of the Internet. Yet elements of live circus will always be with us. Who can deny that we still live in a time where someone with a fancy suit and top hat can begin shouting for our attention and their insistence that they are “the Ringmaster!” Hmm… guess I didn’t avoid that analogy after all.