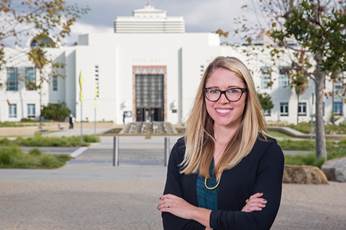 Chief Communications Officer Debbie Lee has selected Constance Farrell as the City’s Public Information Officer (PIO). As PIO, Constance is the primary media liaison for the City of Santa Monica, its spokesperson, and social media strategist.

“Constance brings a love for public service and communications savvy to her new position,” said Lee. “Over the past year, she has been focused on building strong relationships with our local and regional media outlets and our community partners. As PIO, she will continue to expand our social media engagement and elevate transparency through a strong public information program.”

Constance comes to the City of Santa Monica with a decade’s experience in communications for nonprofits and government. For the past year, Farrell has served as the City’s Public Information Coordinator, securing media coverage on the opening of Expo, the Colorado Esplanade, California Incline, COAST, and outreach efforts for the Downtown Community Plan.

“There’s no work I’d rather be doing and there really is no better place,” said Farrell. “I look forward to being a part of the team that is building Santa Monica’s communications program so more people are engaged in their local government and know what’s happening in every corner of the city.”

Farrell is part of the City Manager’s Office, Office of Communications. To stay informed, follow the City on Twitter at @santamonicacity and on Facebook and Instagram at @cityofsantamonica. If you have feedback about the City’s communications efforts, email communications@smgov.net.