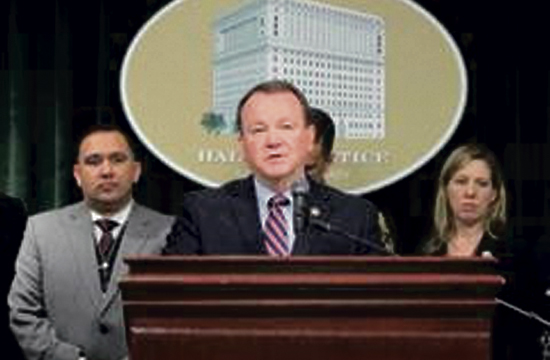 Operation Reclaim and Rebuild focused on rescuing victims of sexual slavery and human trafficking, providing victims with much-needed services, identifying and arresting their captors, seeking successful prosecutions, and disrupting the demand for vulnerable victims by targeting their customers.  Police agencies and other trafficking task forces throughout our state joined in the enforcement operation to send the clear message that California law enforcement shares a unified mandate:  Human trafficking must not be tolerated in our state.

In preparation for the event, an operational planning meeting took place in Los Angeles, with over 120 federal, state and municipal law enforcement detectives from all over California in attendance.  Investigators focused enforcement operations wherever the trafficking of human beings took place, from confronting the reality of sidewalk prostitution by conducting “john” stings, to challenging the virtual reality of the cyber world where traffickers believe they can operate anonymously using the internet.  The internet has furnished a vast variety of opportunities for traffickers, but with the experience of specially-trained cyber detectives who posed as vulnerable teenagers and interacted with suspects on social media, traffickers and customers who were anxious to exploit found their plans foiled.

Minors encountered during enforcement efforts were cared for by personnel from various Department of Children and Family Services Agencies in each county.  In Los Angeles County, the Coalition to Abolish Slavery and Trafficking (CAST) and Saving Innocence (SI) coordinated the emergency services response for victim care and collaborated with similar, non-governmental victim service organizations throughout the state.

Operation Reclaim and Rebuild was widely successful in its endeavor with 28 commercially, sexually-exploited children and 27 adult victims being recovered; 142 males arrested for the charge of Solicitation; and 36 males arrested for pimping.  In total, 474 arrests were made.

As Sheriff McDonnell relayed the mission, efforts and results of Operation Reclaim and Rebuild, he pointedly addressed the traffickers and johns who conduct their illegal business in Los Angeles County and the state of California, and reminded them of the gravity of their crimes and the prosecution to accompany their actions when discovered.  Next, the Sheriff directly addressed the victims, “You are worthy of more.  And we will work tirelessly with our partners…to provide you services and help you rebuild your life.”

“It is our job in law enforcement to protect children – all children – especially those who have fallen prey to adults who seek to profit from their bodies,” Los Angeles County District Attorney Jackie Lacey said.  “We will not tolerate the sexual exploitation of children by anyone, not the sex traffickers and not the people who pay to sexually assault them.”

“First, to provide vital services to any sex trafficking victims we encountered, so they can begin to reclaim and rebuild their lives,” he said. “Second, to start the process to reclaim and rebuild the neighborhoods that have been degraded by organized prostitution schemes which not only exploit the vulnerable, but also often draw other criminal enterprises into the area.”

The Los Angeles County Sheriff’s Department would like to remind the public of the dangers of posting “nude selfies.”