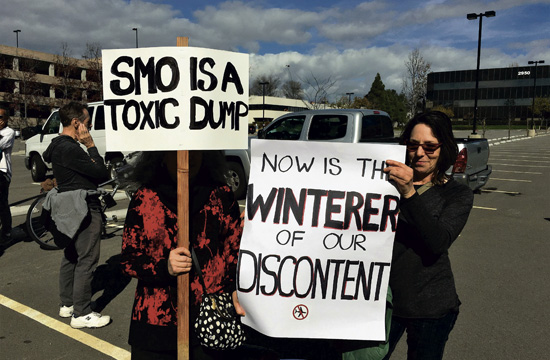 Protestors turned out for a rally on Sat. Feb. 4 in the parking lot of the Santa Monica Business Park just north of Santa Monica airport, following the Santa Monica City Council’s Feb. 3 decision (4-3) to strike a deal with the Federal Aviation Administration (FAA) to keep Santa Monica Airport open until 2029.

The council also agreed to allow private commercial jet company JetSuiteX to schedule flights out of SMO beginning this month, although JetSuiteX agreed to postpone its flights by two weeks.

Mike Salazar, a member of the Ocean Park Association Board and airport2park was also on the committee that fought for Measure LC, requiring voter approval for new developments of airport land except for parks. He told The Mirror, “Pollution from the jets has been proven to be detrimental to the neighborhoods and yet we have an FAA that is sworn to protect our safety but can’t even discuss jet pollution, let alone admit that it’s true.”