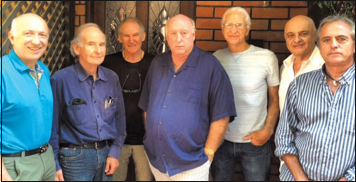 4th and Arizona. The purchases were made to facilitate the goals set out in the City’s Bay-
side District Plan – “‘encourage uses that will generate pedestrian activity’ in the downtown district….” The purchases created a contiguous parcel totaling 112,000 square feet in the heart of our Downtown. The future of this City-owned land is currently under study.

In 2013, the acclaimed architect Rem Kool-haas was retained to design a large commercial complex on City-owned land by the City’s developer. The current design is the result of ongoing review by both residents and City Staff. The end result is a slightly reduced ver-
sion of the original plan. The next hurdle in the approval process is the adoption of the proj-
ect’s Environmental Impact Report (EIR). This is scheduled to take place next month by the City’s EIR consultant who will be looking at the three alternatives below:

Note: All three projects include three-levels of subterranean parking.

In comparing these three alternatives, the main difference is that the second and third options would prioritize the public open space over the building itself. The net effect of scheme 2 would be to replicate what defines many iconic cities – a large, open urban plaza at their center. It would be a place where both tourists and residents could gather for public events, theater, music or perhaps to share a coffee as they discuss their day or plan their visit.

Scheme 3 would consist primarily of a large park.

It has been said of Los Angeles: “When you get there, there is no there there.” Let’s not let this moniker define our City as well. A large public space in the center of our downtown would reinforce our City’s priorities – nature, community, and culture. A large commercial project in the same location would do the opposite.

Perhaps the best argument for a town square or park is that this property already belongs to our City, and hence its residents. The stated goal, when the City purchased the land almost a decade ago, was to create “‘pedestrian activity’ in the downtown district.” The current com- mercial complex, with mostly private tenants and modest space at street level, will do the opposite. The Residents must not stand idly by as this publicly owned amenity is usurped for private, commercial use. It should remain in the public sphere, like our beaches and promenade, to be enjoyed by all, taking advantage of our temperate climate and enhancing our beach town ambiance.

There are many other reasons as well why this property must become a refuge from City Life rather than an enduring symbol of its demise. The proposed project will further the destruction of our public sphere and natural environment only to replace it with an unsustainable building that will block the sun and ocean breezes, create traffic and produce more pollution rather than fresh air.

One asks why the City Council would propose such a large commercial project that will provide minimal civic benefits to our residents? This is our last chance for a town square in the heart of our City. It’s time that the priorities of our city’s leaders and staff align fully with those of our residents.

Of course, there are also other reasons why the project, as currently proposed, is a bad

idea. It will further overload our infrastructure– from water and power to garbage and traffic, to a lack of open space and schools for a growing downtown residential population. It will block sunlight and ocean breezes and create shadows, and “canyonize” the adjacent streets.

The proposed project will do nothing to improve the scarcity of parking in our downtown and will likely make it worse. Compared to the Hines project, this development is both denser and taller, by far. It almost has the same area as Santa Monica Place but on a parcel 1/3 the size.

The two alternatives proposed by residents would enhance our City’s downtown. Both alternatives prioritize open space over towering buildings. Both would create an “active pedestrian environment” justifying the reason for the City’s original purchase. Both would reduce our carbon footprint while providing needed public parking in the heart of our City. Both would provide opportunities to experience nature and cultural events in the open air, a defin-
ing feature of our beachfront community.

The difference between these two alternatives is that one is more weighted towards an “urban plaza” with shopping, dining, possibly a public theater or a small, boutique hotel. The other is primarily a park with some low-impact commercial activities along its periphery. For both schemes, the subterranean parking, along with limited commercial development, would defray the costs. Either of the resident’s alternatives would be far better than what is cur-
rently proposed.

How did we get here? Wouldn’t it be better to

and cultural benefits than placing commercial

gain above civic health? This property’s even-
tual use will be a pivotal moment in our city’s

“Our biggest challenge is to manage our suc-
cess so we can hold onto our values.” If our

City is to start making decisions based on cul-
tural and environmental values instead of eco-
nomic gain, this would be a good place to start.

Should The Plaza at Santa Monica proceed as

proposed, a huge opportunity will have been

squandered. One that is unlikely to come again.

(Santa Monica Architects for a Responsible To-
morrow)