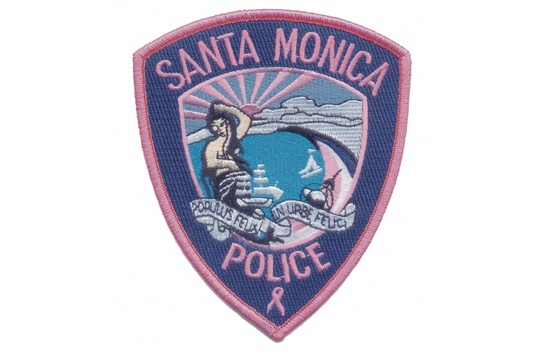 The Santa Monica Police Department recently joined an increasing number of public safety agencies participating in the Pink Patch Project. Police Departments from across the nation are working to combat breast cancer by increasing public awareness and raising funds for breast cancer research and treatment. These participating agencies are operating in solidarity under the rubric of the Pink Patch Project which in the Los Angeles County region is coordinated by the Los Angeles County Police Chiefs’ Association by way of the Irwindale Police Department.

The Pink Patch Project is a public awareness campaign designed to focus attention on the fight against breast cancer, a disease which affects both men and women. Roughly 1 in 8 women will be diagnosed with breast cancer, the chances are that we will know a woman whose life was changed by a diagnosis of breast cancer. While this disease can and does have a profound impact on the patient and his/her loved ones, it is a disease that can be effectively treated with surgery, radiation therapy, hormone therapy, and chemotherapy. The Pink Patch Project has the simple goal of increasing awareness about the life-saving benefits of early detection and intervention.

As part of the collective efforts to bring year-round awareness to this cause, a pink version of the Department’s traditional uniform patch is being made available for purchase to the public. All proceeds from the sale of the patches at $10 each will be donated to the Breast Cancer Society.

Patches may be purchased at the Santa Monica Public Safety Facility, 333 Olympic Dr., Santa Monica or by emailing jennifer.estrada@smgov.net