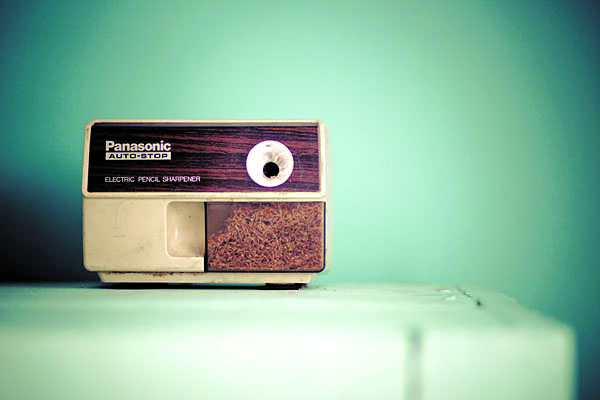 We’re about to make a little jump from electric pencil sharpeners to robotic or self-driving cars. Hang on, as I’ll do the driving here and we’ll see if we end up at any kind of destination.

Of my dozen or so sharpeners, most from the 1970s, my prize is a Panasonic Auto-Stop that indicates when the pencil is sharpened by having a little light go on. To me, this feature on this loaf of bread-sized sharpener represents the totality of needless consumer technology. I can’t just pull the pencil out and check the point on it… I must have a light tell me “Mission Accomplished.”

This gets me to the fever for self-driving cars. There’s always a pragmatic justification from the interests pushing a new technological breakthrough for consumers. In this case, it’s the idea –currently more of a notion – that self-driving or robot cars hold the promise of being safer and preventing highway deaths. But as LA Times writer Russ Mitchell wrote recently in pointing out that more self-driving cars will be roaming our streets by 2018, “the technology is not fully baked.”

In those drawings we always get that show us what a super-convenient future might look like, the passengers in robot cars are relaxing with their Starbucks and checking their phones. They’re not distracted by operating the vehicle such that they can sit back and post on Facebook, “I’m not driving my car right now.” Wow, what a breakthrough!

We no longer chop firewood or carry our own water. It’s reasonable to assume that as personal technological products have become available, we’ve lost the ability to do the tasks that appliances take over for us. Nobody knows what an ice cube tray is anymore, but does that mean that we should just keep “innovating” until a robotic device makes our peanut butter sandwiches for us?

This column has long wrung its hands over the loss of certain basic skills because of the march of technology. We no longer need to look anything up to settle an argument; we simply Google with our phones and take whatever information is produced as gospel. Will we eventually live a life in which we never have to tie our shoes or shave or turn on water to shower and then hop into cars that drive us to… well, what? Will we even be going to work by the time all this arrives? I’m starting to see yet another of those drawings of the future, one in which exercise and exertion and engagement in simple tasks like steering a car have disappeared and caused us to become slug-like masses of flesh that live only for funny YouTube videos with cats.

Right now, and especially in Southern California, cars are something more akin to an exoskeleton allowing us to coordinate our arms, legs and senses of sight and hearing such that we can travel from one location to another and sometimes – traffic permitting – derive a little pleasure from the experience. Won’t sitting inside a self-driving car make us something more akin to a parasite, albeit one living inside a robot? What happens to that sense of freedom that’s such a big part of driving a rag-top Chevy along the Pacific Coast Highway? What’s the point of cranking up the Beach Boys if we’re just prisoners held in a bubble-roof robot car?

I also fear this will inevitably lead to consideration of robotic airline jets. Let me say right now, I’d rather have Sully up in the cockpit looking out for geese than to have a thin electronic voice announce “This is your android Captain. Sit back, relax and pray that our Chinese suppliers got all the microchips soldered properly.” I’m just assuming robot pilots will keep telling little jokes during the ‘welcome aboard’ speech.

Science and technology always reaches; that’s its prime directive. But then there’s the motivation to turn what is learned into something that makes life easier or better. When those impacts occur in medicine and health care, we’re delighted. Sometimes we’re just delighted for a little while, as we were with Polaroid cameras until home video and then digital photography arrived. There’s something about self-driving cars that feels like teams of smart people are essentially reinventing the rickshaw. And I’m not so sure I’d want to be bleeding inside a self-driving ambulance when the software decides to crash. I might just ask the voice-activated driver to pull over and let me walk the rest of the way to my robot doctor.