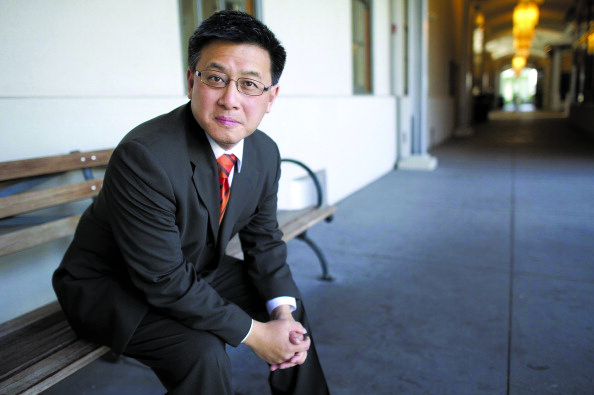 If there’s one quality shared by several of the leading candidates to succeed Jerry Brown as governor, it’s flamboyance. No one ever accused Lt. Gov. Gavin Newsom, the former mayor of San Francisco, or ex-Los Angeles Mayor Antonio Villaraigosa of being boring.

The same for financier Tom Steyer, who has spent many millions pushing green, environmental causes, often centering cause-oriented commercials around himself.

So it’s no wonder these three and San Diego Mayor Kevin Faulconer, the most prominent Republican prospect for governor next year, are the early leaders in the polls, even though no one yet approaches even 30 percent support in any respectable poll.

But the other major office-holding Democrat in this race, state Treasurer John Chiang, brings a different approach. He’s not about bling, but concentrates on policy. He’s also shown he can be tough on his fellow politicos, regardless of party.

He proved this in 2011, after voters passed Proposition 25, which requires legislators to pass a balanced state budget by eachJune 15, or see their salaries and expense account checks abruptly halted. No legislator thought this would ever actually happen, because the state controller is one of them, an elected politician.

But Chiang, then the controller, announced on that June 22, with lawmakers a week past the deadline, that he would dock their pay. He did, the average legislator impacted to the tune of about $400 per day. A balanced budget quickly followed and the lawmakers have been on time ever since, after almost a decade of consistently late budgets.

So it’s not very surprising that Chiang, who trailed badly in the early polls, is not approaching California’s many conflicts with President Trump in the same way as his fellow candidates, who have loudly decried many of the new federal administration’s moves but so far done little about them.

Knowing that Trump and his Secretary of Energy, former Republican Texas Gov. Rick Perry, deny the science behind global warming and the many measures California has adopted to combat it, Chiang realizes the federal loan guarantees that have enabled most solar and wind energy projects are bound to dry up soon.

So he’s pushing “green bonds” as a substitute. By that, he means bonds issued by corporations, cities or states to finance climate-friendly projects. Rather than lending money easily because of a federal loan guarantee in case a planned project goes belly up, lenders, borrowing companies and local agencies will have to vet proposals very carefully.

“Because of California’s record in making these projects succeed, and the state’s mandate for producing more and more renewable energy, the market for this kind of bond will accelerate,” says Chiang, whose current job sees him promote California state bonds to the world’s leading financiers. “We will have big investments from Europe and China in this; we’re not looking just at the pool of investors in the U.S., but the world.”

Chiang maintains bond money going to green projects with solid profit prospects “will eventually grow to more money than has been enabled by federal loan guarantees. There is a huge interest around the world in American projects, and people are looking to California for leadership. There are many billions of dollars out there.” For sure, this kind of leadership will not emanate from Washington, D.C. for at least the next few years.

Chiang has quietly done this kind of thing for the last decade, as controller and then treasurer. He’s aware that if voters think of him at all, it is as a technocrat.

“We have to communicate more,” he said. And he had more than $7 million on hand in February to help him start doing that. “I will offer solutions to the state’s other problems just like I am now with the green bonds, as ways to move forward with or without support from President Trump.”

Chiang also thinks California should pick its fights carefully, and should shun the idea of California independence. “California needs to be doing things to produce prosperity for us all. Pursue independence and things like water, pension debt and other problems would not get solved.”

This kind of practicality could make Chiang effective as governor. But first, he’ll have to get past the technocrat image which his solid ideas ironically tend to reinforce.