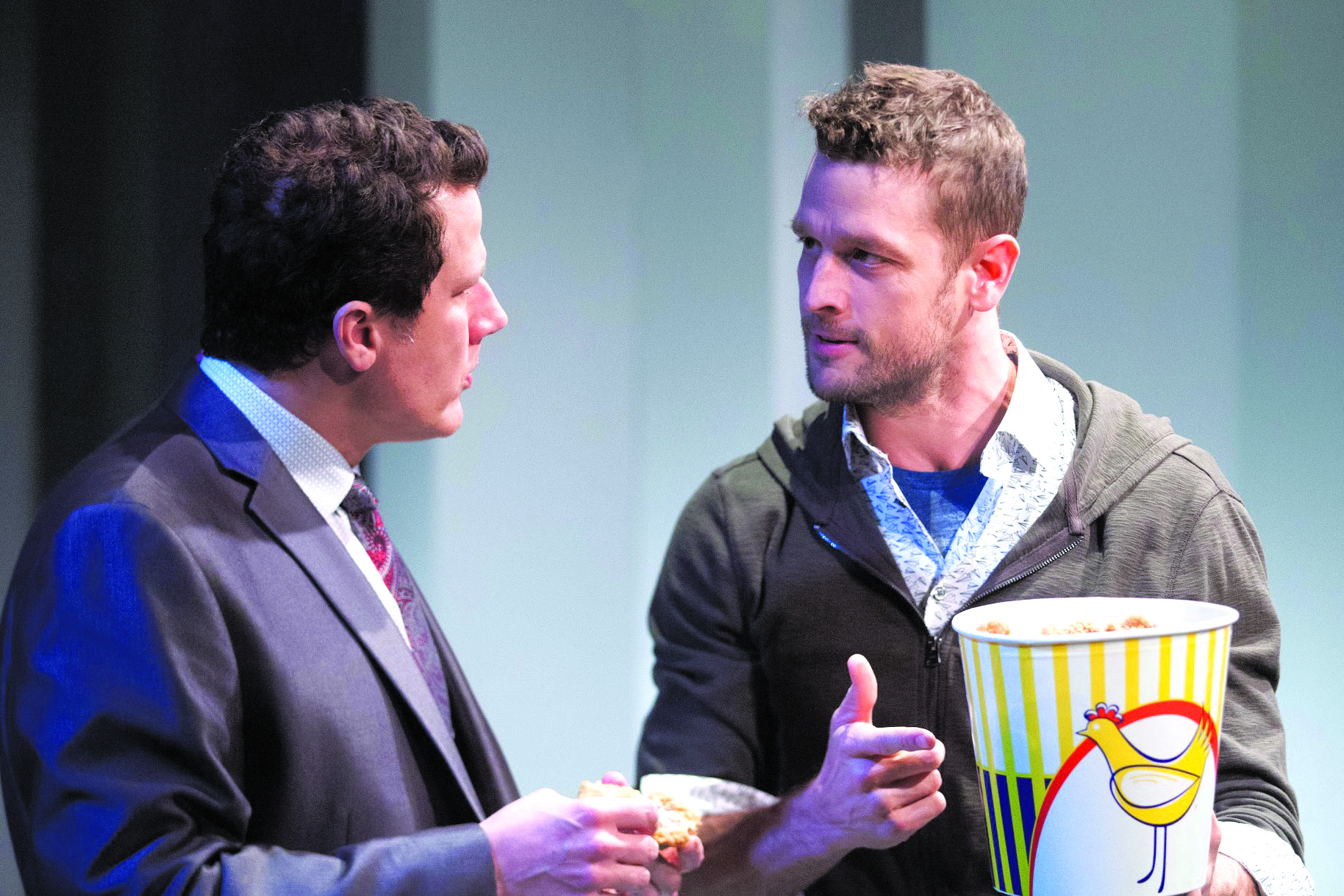 If ever there was a compelling argument for the merits of the 99-Seat Plan, the production of Rogue Machine’s West Coast premiere of Alexander Dinelaris’ “Still Life” could be the poster child for that argument. The playwright has a long string of hits including co-writer of “Birdman (or The Unexpected Virtue of Ignorance,”) which won the Academy Award for Best Picture.

Under the powerful direction of Michael Peretzian, who assembled a highly professional cast, the storyline revolves around the key character of Carrie Ann, a gifted but troubled young woman beautifully brought to life by Laurie Okin. Her performance illuminates the multi-level complexities of her character. Following the death of her father, played by Frank Collision, and a successful exhibit, which displayed a number of photographs of dead chickens, she experiences a psychological paralysis and is unable to pick up her camera. Her despair is illuminated in the opening scene, which is performed on an almost bare stage with only a chair and a podium. She is the guest speaker at the Ramirez Family Foundation, an engagement arranged by her manager Joanne, nicely played by Susan Wilder who captures the aggressive, sometimes cold nature of her character. It’s business first, no matter what. Carrie Ann is suppose to discuss her photographs, but instead goes into a rampage and storms off the stage.

Staying with the chicken theme, the action shifts to a discussion between Terry, the head of a marketing firm that does trend analysis, and his creative guy, Jeff. Terry, deliciously portrayed by Jonathan Bray, captures the outright, pure sleaziness of his character. He has an irreverent comment during even the saddest moments. Jeftf, skillfully played by Lea Coco, is the extreme opposite of his crass boss and embodies the depth and sensitivity of his character. Taking a piece of chicken out of a bucket, Terry comments on how greasy the chicken is: “It’s how you know it’s good.” Eventually, a really cheesy commercial is created, likening eating fried chicken to having a good family life.

Terry and Jeff attend the opening night of Carrie’s exhibit. Terry makes a vulgar comment about the artist’s ass while Jeff is taken with the sadness of the photographs of dead chickens. He approaches Carrie asking her why she took those particular pictures and thus begins their romance. I should mention that giant reproductions of photos, clearly taken in Africa of indigenous natives, are flashed on screens flanking stage left and right, the reason for which becomes clearer later in the play.

We now meet Jeff’s best friend Sean who is a doctor, played quite sympathetically by Nardeep Khurmi. He has to give Jeff some bad news about the result of a test, the prognosis of which slowly seeps in. Trying to continue to live a normal life, Jeff and Carrie are guests at the home of the good doctor and his outspoken wife Mary, played by a versatile Jennifer Sorenson who also plays multiple rolls. Drinking wine and laughing, the discussion begins to center on the progress of the women’s movement and its place in today’s society. This kind of political dialogue is always on a slippery slope in danger of sliding into diatribe. However, thanks to the excellent script, and actors who really own the words of their respective characters, that particular scene absolutely does not fall prey to the dangers inherent in such dialogue. Another slippery slope scene is between Jeff and Sean, which is definitely a one-Kleenex moment. Jeff asks, “What will happen?” Sean answers, “Nothing. You’ll just go to sleep… See you on the other side.”

It’s been one of my contentions that so many plays have a weak Act II, but this is not the case in “Still Life” which has a very compelling second act as it explores what happens to the relationship between Carrie and Jeff as a result of his illness. They are very much in love and Jeff tells her “You are every woman I’ve ever dreamed of.” Again, what could have been soupy dialogue comes off as a genuine declaration of his love. At the same time Jeff is struggling with his health, Carrie is offered an assignment by National Geographic to do a shoot in Tanzania. Both her manager and Jeff insist that she take the assignment, which by the way, would necessitate her using a camera which she is not done since her father’s death. As her father was dying, he confessed that “It’s cruel to realize you are mediocre at the end of your life,” assuring Carrie that while he is not gifted, she truly is. Eventually, even though she doesn’t want to leave Jeff, she consents to take the assignment and invites Jessie, a young talented photography student to go with her. A most adorable Tania Verafield delivers a wonderful performance as the intense, extremely verbose young woman who comic utterances fall squarely into the stream-of-consciousness category.

Going on the premise that there was pain in Terry’s life to cause him to be the horrible person he is again, because of the compelling writing, there is an explosive explanatory scene in a bar between Terry and the bartender Al, played meticulously by Sorenson, who in no way resembles Sean’s demure wife Mary. Terry is very drunk on whiskey and snorting cocaine. He is a belligerent drunk and verbally attacks Al for her being a lowly bartender. He tells her she’d be better off being a prostitute. His drunken ramblings reveal that he was a battered child and was molested by his father. One can begin to understand the root cause of his despicable behavior. That reverie, however, would last only a few seconds before he reverts back to his “normal,” hostile way of communicating. To prove her ultimate willingness to become a prostitute, he offers the barkeep $300 if she would let him touch her breasts. What follows are some interesting moments with a few unexpected surprises.

Carrie returns from Africa too late to see Jeff for one last time, but what happens to her as a result, catapults her back to picking up her father’s camera which she had given to Jeff. Her shot is beautifully tragic and perhaps reflects the playwright’s intention of showing how Carrie’s tragic loss propelled her to get unstuck and move forward with her life.

This is a story that will make you laugh, make you tear-up, and make you cheer. It also shines a light on the true nature of love as expressed under the saddest of circumstances.

Rogue Machine at the Met*

*The performance space is up two steep flights of stairs so bear that in mind if you have a physical challenge.