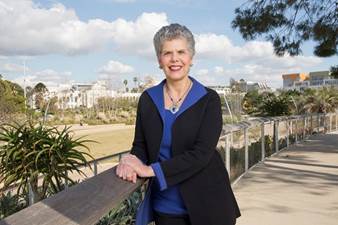 After nearly 27 years with the City of Santa Monica and nine years serving in the City Manager’s Office, Assistant City Manager Elaine Polachek has announced she will leave her post in July. Elaine shared the news while accepting an OWLie Award at the Santa Monica Chamber’s Organization of Women Leaders International Women’s Day Breakfast last Friday, March 10.

“When I came to Santa Monica in the summer of 1984 looking for a job, it never occurred to me that I would spend my career here. It has been one of the great honors of my life to serve this community. I leave proud of what we’ve achieved together and excited for Santa Monica’s future.”

Elaine has a vast grasp of City operations from her time at the Pier, Community and Cultural Services, Community Maintenance, and in the City Manager’s Office. In 2015, she served as Interim City Manager before Rick Cole was selected. During her tenure with the City, Elaine has been involved in such efforts as the revitalization of the Santa Monica Pier, Council adoption of a new Zoning Ordinance that guides implementation of the Land Use and Circulation Element, and a Facilities Renewal Program that increased and enhanced proactive maintenance of existing City facilities. She also developed a Council-adopted community events ordinance and guidelines, and negotiated agreements for major events and exhibitions including LA Marathon, Ashes and Snow, Cavalia, and Cirque du Soleil.

“The passion, precision, and compassion Elaine has shared with Santa Monica all of these years is something we are all better for,” said Mayor Ted Winterer. “Her leadership will leave an indelible mark on this community.”

As Assistant City Manager, Elaine oversees the day-to-day administration, supervision, and coordination of 11 departments. She focuses on developing, enhancing, and sustaining relations with community and neighborhood organizations, and key city business partners such as the Santa Monica Chamber of Commerce, Convention and Visitors Bureau, Downtown Santa Monica, Inc., and the Pier Corporation.

“It’s been a great privilege working with Elaine and seeing the impact she has on nearly every aspect of City operations,” said Mayor Pro Tem Gleam Davis. “It’s very hard to see such talent leave the City, but we are thankful for her 27 dedicated years of service.”

In 2016, Assemblymember Richard Bloom selected Elaine as the 50th Assembly District’s Woman of the Year. In 2014, she received the John H. Nail Award from the League of California Cities City Managers’ Department.

An executive search will be conducted for the Assistant City Manager position.