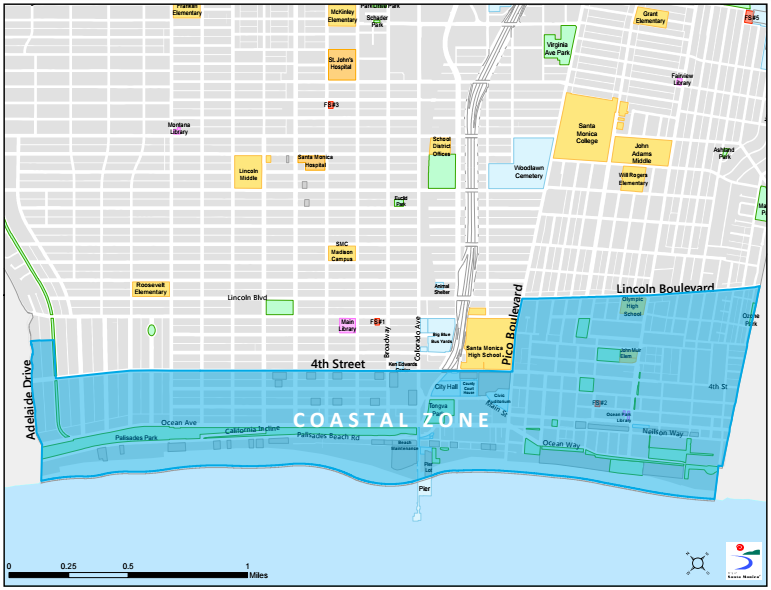 While the focus and attention of many residents has been on the development of Santa Monica’s controversial Downtown Community Plan (DCP), another plan is also due for final draft release and potential adoption in 2017. Yes, there is more than one planning document underway and they overlap. Confused? Yep, so are we. While the Downtown Community Plan has had its share of preliminary controversy (including the projected 12-story Plaza At Santa Monica and other tall, dense projects to come) the Santa Monica Local Coastal Plan has been skim-boarding along our shoreline.

Let’s take a look at the Local Coastal Plan (LCP.) The California Coastal Act was adopted in 1976. The State acknowledged the importance of the California coast as a regional and statewide public resource and established policies to ensure that the State’s interests are given proper consideration in the development of its coast. The California Coastal Commission assumed the direct responsibility for the protection of California’s magnificent coastline and each coastal city was supposed to follow up with its own local coastal plan to delineate the conditions and issues within that city. There are two components to the LCP. The Land Use Plan (LUP) and the Implementation Plan. Santa Monica’s last Land Use Plan was certified in 1992. However an Implementation Plan was never certified.

In 2015 the Planning Department began to compile a new LCP. It consists of a Land Use Plan combined with an Implementation Plan that would be approved by the Coastal Commission. It would then act in place of the layered authority that exists today, with the Coastal Commission currently holding final sway over development from the high tide line to Lincoln Boulevard south of Pico Blvd, and to 4th Street north of Pico.

While the Coastal Commission has recently been plagued with administrative issues and commissioner conflicts, it is the only appeal option to overturn municipal planning decisions along our coastline. In fact, residents in Venice regularly turn to the Coastal Commission to assist in their attempts to preserve their community’s character and history.

Santa Monica’s Planning Department website asserts that our city’s downtown has dramatically changed since 1992. The planners are correct in that assertion. “New public buildings in the Civic Center; Tongva Park and the Village; Downtown pedestrian, bike and transit enhancements; renewed activity on the Pier; the Annenberg Beach House; the Expo Terminus Station and the Colorado Esplanade are some of the most significant changes that have occurred since the last LCP was certified.”

The City’s website goes on to state that “The General Plan Land Use & Circulation Element (LUCE), along with City-adopted specific plans and action plans have introduced progressive policies that foster movement into and around the Coastal Zone by providing a variety of choices, thereby reducing vehicle trips and parking demand, relieving congestion and promoting clean air.”

So which is it? Is the Coastal Commission merely a patsy for our planners or does that Commission wield any real control? Will our residents be better off without the extra oversight? Currently, all development projects, City plans and plan amendments that are located within the City’s Coastal Zone require dual permitting. The City gives its approval and then an application must also be made to the California Coastal Commission. This results in more fees and more time consumed. The Local Coastal Plan Update will eliminate the need for Coastal Commission approval along Santa Monica’s coastal areas. Therein may be the potential rub. Do our residents trust that the City planning process will protect Ocean Park, work in conjunction with the Downtown Community Plan and protect the northwestern part of the city from developer greed?

The LCP will also look at the potential for devastating sea level rise as global warming continues to increase. It will focus on continued access to our fabled pier by those of limited mobility, and on protection of endangered birds along Santa Monica’s coastline. All of those goals are laudable. We’ll all have to decide whether California Coastal Commission oversight is necessary to help dampen the exuberant forces of development in Santa Monica – or can our City’s planning process be trusted to protect our fragile community?

We’ll be watching. You should be as well.