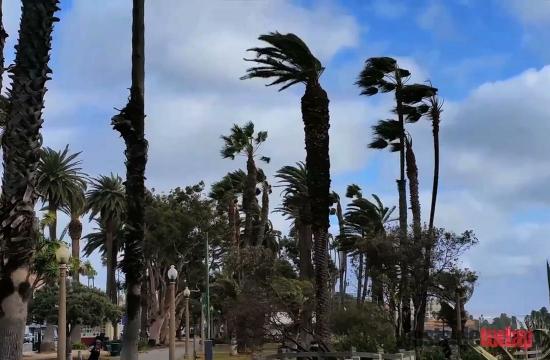 Fierce winds that could gust at up to 80 miles per hour will lash the Southland from Thursday afternoon through Friday morning, buffeting mountain, coastal, urban, and valley areas, National Weather Service forecasters said.

Thursday’s winds, which are not Santa Anas, promise to be as powerful as those that swept the region from Monday night into Tuesday, according to an NWS statement. The strongest winds will blow through and around the Interstate 5 Corridor in the San Gabriel Mountains, “where peak gusts of between 70 and 80 mph are possible,” it said.

Northwest winds of between 20 and 30 mph will blow through the San Gabriel Mountains Thursday afternoon, gusting to 50 mph, then gain strength Thursday evening, blowing at sustained speeds of 30 to 50 mph with 80-mph gusts, the statement said.

In the Santa Clarita Valley, a high wind warning will be in force from 2 p.m. Thursday until 3 a.m. Friday. While it’s in effect, the area will experience winds of between 25 and 35 mph gusting to 60 mph, forecasters said.

A wind advisory — one not followed by a high wind warning — will take effect a 2 Thursday afternoon and expire at 8 a.m. Friday along the L.A. County coast, in beach cities, metropolitan L.A., the Downtown area and the Hollywood Hills. Expected in those areas beginning early Thursday afternoon are west winds of between 20 and 30 mph gusting to 35 mph. Affected roadways will include Pacific Coast Highway and the San Diego (405) Freeway.

A wind advisory will be in effect from 2 p.m. Thursday until 8 a.m. Friday on Santa Catalina Island, where winds of between 20 and 30 mph gusting to 40 mph are expected beginning early Thursday afternoon. The same will apply to the San Fernando Valley, where roughly the same conditions will prevail, although there could be 55-mph gusts near the foothills. The wind could affect Laurel Canyon Road and Coldwater Canyon Road in the San Fernando Valley.

In the San Gabriel Valley, a wind advisory will be in effect from 6 Thursday evening until 8 a.m. Friday. North Winds of between 20 and 30 mph with 45 mph gusts will develop there Thursday evening, mainly in the foothills, and last until early Friday morning. Gusts of 55 mph are also possible there.

“Winds this strong may down trees and power lines, causing property damage or power outages,” warned an NWS statement, adding that residents in windy areas should secure loose outdoor furniture before the onset of strong winds.

The weather service warned that Thursday’s winds will be strong enough to cause problems for drivers, especially in high-profile vehicles or vehicles towing trailers.

Thursday’s winds will be the product of what meteorologists call an inside slider, which Thursday consists of a storm system out of the Pacific Northwest headed for Nevada.

Partly cloudy skies were forecast in L.A. County Thursday, along with highs of 58 degrees Fahrenheit on Mount Wilson; 67 in Avalon; 69 at LAX; 70 in Palmdale and Lancaster; 72 in Saugus and Long Beach; 73 in Pasadena and downtown L.A.; 74 in San Gabriel and Burbank; and 75 in Woodland Hills. Through Wednesday, highs will be in the 70s and low 80s.

Sunny skies were forecast in Orange County, along with highs of 64 in Laguna Beach and San Clemente; 66 in Newport Beach; 73 in Mission Viejo, Irvine and Anaheim; 75 in Fullerton; and 77 in Yorba Linda. Orange County’s highs in the coming days will also be in the 70s and 80s.