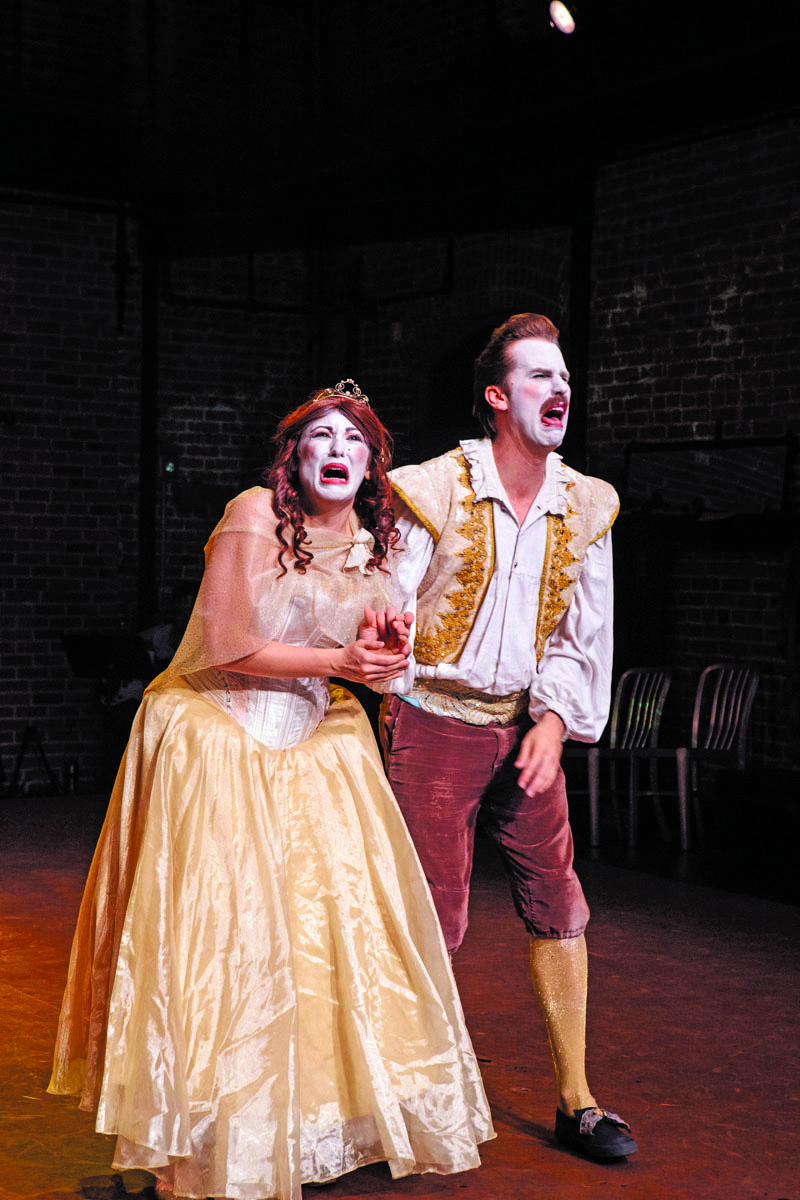 Commedia dell’Arte is a style of theatre created in 16th century Italy. With its highly stylized, broad method of acting, its primary purpose, besides being “entertaining,” was to illuminate how foolish the upper class was and how their servants became enmeshed in their masters’ silly machinations. Traditionally, a troupe would travel around Italy performing in town squares. Masks to disguise the actors were worn, probably to hide their identities as several actors were actually killed following a performance. One had to tread lightly on how much to express, but the more outrageously funny the presentation, the more they could put over on the ruling class.

All of the stock characters in Commedia dell’Arte can be identified as one of three types: Master, Servant, and Lovers. Utilizing these traditional archetypes, Tim Robbins has written and brilliantly directed, “Harlequino: On to Freedom – A Musical Celebration of the Rebel Slave,” wonderfully played by Joshua Lamont. With his mask covering the upper part of his face and a strong physicalization, it is through him that we see the exploration of both ludicrous and provocative ideas, as well as actions that keep men in chains, literally and figuratively.

The rollicking first act begins with Dr. Ignatius (Bob Turton) and Dr. Phineus (Will McFadden) breaking the fourth wall, speaking directly to the audience. This theatrical device is utilized throughout the play. The good doctors are trying to do a slide show lecture on the origins of Commedia del’Arte. Before long, sheer bedlam breaks out and the stage is filled with actors dressed in traditional costumes and exaggerated clownish makeup. They keep interrupting the lecture injecting opinions that are not part of that “tradition.” Pantalone (Pierre Adeli) refers to Harlequino saying, “He is not a slave – he’s a servant,” to which Harlequino quickly replies “No. I’m a slave.” In this wonderful theatrical tradition, the upper classes are made to look very foolish. For example, one of these silly men says, “My wealth erases my age.” The entire evening is filled with laughter, beautiful ensemble work, and as we have come to expect from Mr. Robbins, his left wing political bent is deftly woven into the crisp dialogue so that we are moving back and forth between 1530 and the dangerous political climate, which we are currently facing. Modern references, such as water boarding, building a wall, and student loan debt, are craftily laced into the dialogue without losing the stylized reality of the time and place of the action.

No Commedia del’Arte production would be worth its masks without a love story and indeed that is present. Isabella, played by an adorable Lee Margaret Hanson, is in love with Mario, hilariously played by Adam Jefferies. Their characterizations are outrageously over the top and are just one integral part of the pandemonium. They often lovingly bicker such as Isabella saying, “You see the worm in the dirt. I see the flower.” But as any noble lover would declare, “I’d rather be dead than to live without her.” But alas her father wants her to marry an Army captain, ironically also played by Adam Jefferies, who she challenges to a duel.

Robbins is a keen wordsmith and at times takes a single thought and comically twists and turns it until it reaches absurdity. For example, there is a funny riff by the doctor discussing how many ways a medical problem with a man’s penis can be described. They range from “Smelly urine of your schlong,” to “A problem with your cum gun, or “A clog in your hot dog.” Oh yes. He admits he hates being near sick people. But fear not. There are also poetic lines such as ““A butterfly on the nose of a unicorn.” Again, incorporating Robbins’ continuous commitment to illuminating the human condition, we hear such lines as, “Why does mankind constantly conspire against itself,” or “Why will man never be content?” One line, which stuck out for me in particular was, “Do you hate freedom so much that you would refuse to die for those who promise you freedom.” So much goes on during this two-act play and there’s never a dull moment. Whirling dervishes would be an apt description.

In describing the look of this production, the word kaleidoscope of vibrant colors comes to mind. Beginning with the outstanding period costumes designed by Olivia Courtin, to the complementary lighting by Bosco Flanagan, and of course the book, music and lyrics by Robbins. Under his crack direction, all the elements come together to form a cohesive, rare evening of theatre, manifesting in an outlandish combination of high and low comedy, telling the story of love and resistance in an authoritarian society. Special shout out to David Silverman for the outstanding look of the program and show art. Commedia del’Arte is not a discipline that comes down our theatrical pike too often but if you love plays, and want to see something quite different, you owe it to yourself to experience this awesome evening of very unusual theatre.

Tim Robbins “Harlequino: On to Freedom – A Musical Celebration of the Rebel Slave”

Thursday nights: Pay What You Can