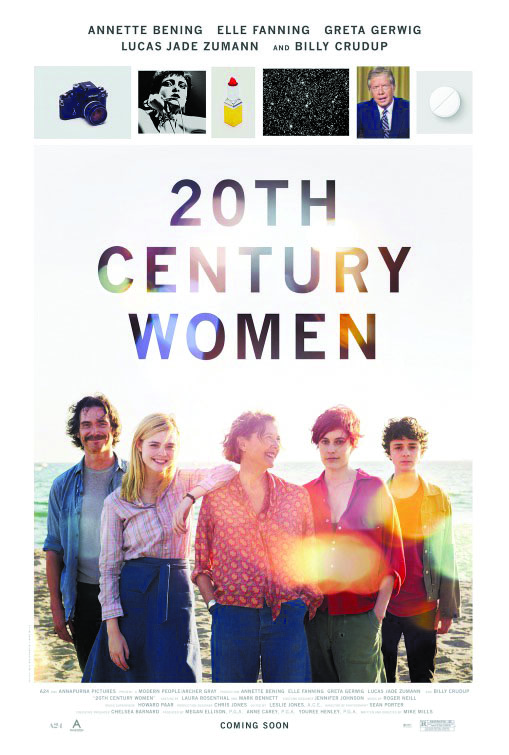 Jamie is an insecure, sensitive adolescent who his mom believes would benefit from female perspectives on things. Dorothea is a cynical, unhappy woman who has a negative outlook on love and relationships.

Jamie is close with a female his age named Julie (Elle Fanning), who he spends a lot of time with. While the relationship is a platonic one, Abbie tells Jamie at one point that if he ever wants to get further with Julie (in a romantic sense) that he must be assertive.

The movie explores issues of feminism, sexuality, and identity.

Both Dorothea and Abbie are very much into feminism and Abbie tries to impart this philosophy onto an impressionable Jamie, who as a result starts reading feminist books. Dorothea does not believe that she needs a man in her life to make her happy.

Jamie is at the age where he is ready to learn about the ins and outs of sexual relationships and this provides some of the comedy in the picture, as for example when he experiments with sexual terminology he has never used before. Abbie, after being diagnosed with cervical cancer, still wants to get sexually intimate with William, but makes it clear that she wants it to be no strings attached. William also finds that he has feelings for both Abbie and Dorothea, which complicates things.

Characters in the film struggle with identity issues. Jamie is not sure whether he wants to pursue a romantic relationship with Julie and is also not particularly masculine for someone his age. Abbie, after finding out what a cervical cancer diagnosis involves, is heartbroken, and yet does not want that to define her, as she continues to explore her artistic side. Then Julie, whose mother is a therapist, resorts to cutting herself at times and sleeping around with guys indiscriminately because of self-esteem and trust issues. Jamie is the only one Julie can truly feel comfortable around and confide in. Jamie and Julie’s relationship was the most believable in the picture and showed how close bonds can be beneficial in times of need.

As well-made as the movie is, I found some minor shortcomings. I thought the ending, which gives a glimpse of the characters in the future (both visually and through narration) tied things up too neatly. I would have preferred not knowing what the characters were like later on. Also, it did not seem believable that 15-year-old Jamie would have been able to be in a club; he clearly looked underage. Skateboarders rarely wore helmets in 1979, so I found it odd the movie would depict some doing so. Lastly, wine cooler drinks were not around in 1979, so when Jamie and Julie ask someone to buy them some, it seemed out of place.

The film is humorous and very well written, with Fanning, Crudup, Gerwig, Zumann, and Bening turning in strong work of depth and vulnerability, especially Zumann and Bening, who I found to be remarkable. Bening’s mannerisms ably convey a woman who is stressed out. Meanwhile, Zumann perfectly captures the awkwardness and low self-confidence of a teenager trying to find himself.

The movie effectively brings forth a sense of nostalgia and youthful innocence. The character’s longings become our longings. Also, the music in the picture plays a key role as it helps shape the characters. We can relate to the characters because they experience things that we can identify with on some level.