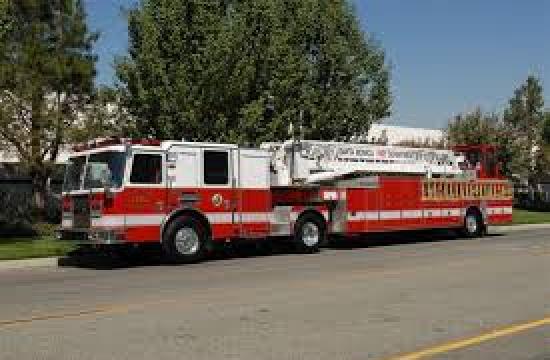 Five people were injured Thursday, two critically, in a fire that apparently started in grass between two adjacent homes in Pacific Palisades and spread to the residences, officials said.

The greater-alarm fire broke out at 2:14 a.m. on a descending hillside in the 16500 block of West Las Casas Place, said Margaret Stewart of the Los Angeles Fire Department.

Five people were hospitalized for treatment. A 53-year-old woman and a 67-year-old man were in critical condition; and a 17-year-old girl, a 14-year- old girl and a woman in her 90s were in fair condition, Stewart said.

One pet cat died in the fire, Stewart said.

The man, the younger woman and the teens lived in one residence, and the older woman lived next door, Stewart said.

The fire was knocked down by 88 firefighters in 44 minutes, Stewart said.

The fire apparently started in grass between the homes and then spread to the residences, Stewart said. The cause of the grass fire was under investigation.

Fox11 reported that the 53-year-old woman and the 67-year-old man are the parents of the teenage girls.

A woman in her 90s, who was rescued by firefighters, was in the adjacent home with her daughter, Swedish actress Gunilla Persson, when the fire broke out, Channel 11 said.

“It’s just the most horrific experience I’ve ever had in my life,” Persson said. “I woke up hearing some strange noises and I said, `What is it? Is it firecrackers or something?’ And then … I ran to the staircase, and I saw flames. We thought that the house was going to collapse …”

Stewart said there were smoke alarms in the homes, but it was unclear if they were functioning at the time of the fire.