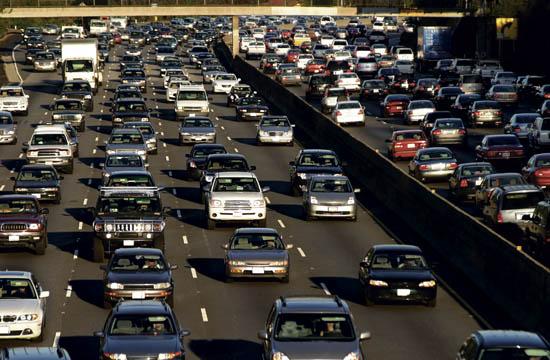 Two people were injured Wednesday when a car driven by a woman in her 80s struck at least two vehicles and a bicyclist in Santa Monica, police reported.

The crash occurred about 2:40 p.m. near the Santa Monica Pier. The octogenarian was northbound on Ocean Avenue just south of Colorado Avenue when her car side-swiped one vehicle, then struck a bicyclist, according to Lt. Saul Rodriguez of the Santa Monica Police Department.

After hitting the bicycle, the woman’s car struck at least one other vehicle that was westbound on Colorado Avenue, stopped at the intersection and set to head left onto Ocean Avenue, Rodriguez said.

Images from the scene showed that the vehicle struck in the intersection was pushed into at least one other vehicle.

The bicyclist, whose age and gender were not immediately available, was taken to a hospital and was expected to recover, according to the lieutenant.

The airbags on the woman’s car deployed and she was taken to a hospital after complaining of chest pain, Rodriguez said. Her name was not released.

The intersection was closed following the crash, causing traffic backups during the afternoon rush.