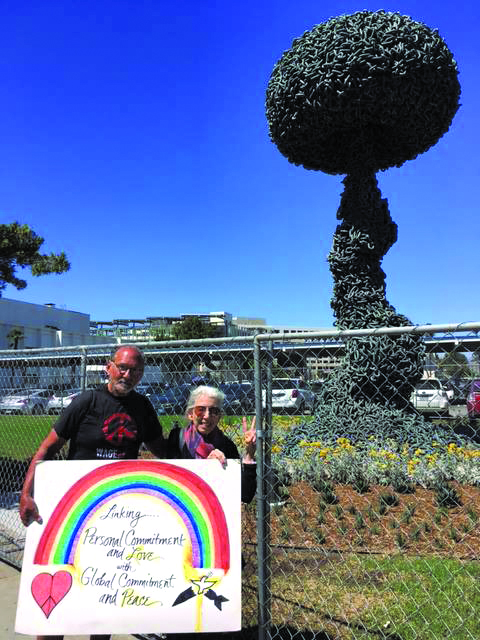 A sustainable peace garden and new solar lighting will be unveiled as part of a rededication ceremony for the Chain Reaction sculpture at the Santa Monica Civic Center scheduled for Monday, June 26.

“The issue of nuclear weapons is a peace issue certainly, but also an environmental issue, because nuclear weapons could destroy our environment and our planet,” Rubin said. “This peace garden – life, sustainable plants, beautiful flowers – surrounding Chain Reaction is going to add a wonderful element while not detracting in the slightest from the artistic integrity of this amazing sculpture.”

Designed by political cartoonist Paul Conrad to resemble a nuclear mushroom cloud made of chain link, the 26-foot-tall Chain Reaction has stood on the 1800 block of Main Street, north of Pico Boulevard and the Santa Monica Civic Auditorium, since 1991.

The statue, funded by an anonymous donation of $250,000, now known to have come from peace philanthropist Joan Kroc, was unanimously designated a City Landmark by the Santa Monica Landmarks Commission on July 9, 2012.

Chain Reaction has stirred controversy for its appearance and its message, but Rubin, who will give a welcome address at the rededication, encourages everybody to attend the ceremony regardless of their opinions on the work.

The rededication ceremony, sponsored by Save Chain Reaction and Physicians for Social Responsibility Los Angeles, comes on the eve of what would have been Conrad’s 93rd birthday and will feature several guest speakers, including Santa Monica Mayor Ted Winterer, Santa Monica Conservancy President Carol Lemlein, and Conrad’s son David Conrad.

Rubin said despite its grave intent, Chain Reaction brings a message of hope.

“It’s not something to be afraid of,” he said. “It’s something that we have the power to change. That’s what Conrad did with his description. He said, ‘This is a statement of peace. May it never become an epitaph.’ There will always be some people that don’t like it and don’t like what it represents, but it is virtually everything that I know Santa Monica to be standing for – for peace, for a clean environment, and against nuclear weapons.”