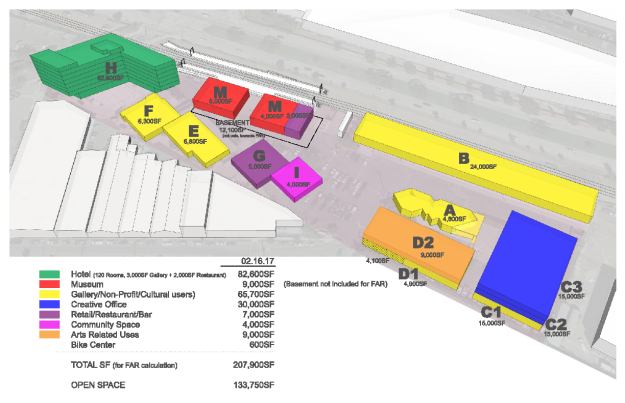 The future of one of Santa Monica’s remaining undeveloped enclaves, Bergamot Station, is back on the table with a revised preliminary development plan for the site up before City Council Tuesday.

Sent back to the drawing-board after a previous site development iteration was directed by Santa Monica City Council members to be amended by City Staff, the new version includes input from the Bergamot Advisory Committee and seeks approval for developer Worthe Group to retain the reigns on the project that now sports a 120-room, 80,000 sq. ft. boutique hotel, creative office space, restaurants and cafes, and a museum.

“The [new] Bergamot Area Plan was adopted after an extensive community planning process that involved residents and other stakeholders,” said Jason Harris, Economic Development Manager with the City of Santa Monica. “The Bergamot Advisory Committee involved collaboration among a variety of stakeholders, including residents and gallery owners. Moving forward, continued collaboration among all parties will be critical to Bergamot Station’s success.”

This approach is essential, according to local artists; however they question the “manufacturing” of an art center as counterintuitive to the intrinsic artistic value of an art space itself.

“It is time for the City to join hands and create an arts center,” prominent Santa Monica artist Joan Robey told The Mirror. “Not do this from top-down and impose this commercial approach.”

While acknowledging the need for economic viability, Robey, along with many local artists, is also questioning the inclusion of a 120-room hotel on the premises. The hotel was excluded from the Advisory Committee’s recommendations.

“What does a hotel bring us?” she asked. “Tourists come to Santa Monica to see the beach, the Pier… there are plenty of hotels in Santa Monica.”

According to Harris, the Plan identified a hotel as a “synergistic use that would add amenities to the site and Bergamot area, bring additional patrons to support the businesses on the site, and create additional revenues that could support the Big Blue Bus,” the benefactor of funds raised on the site.

No time frame has been given for the project but indications have been proffered that the site would be developed gradually, with many galleries staying where they are (aside for those in the future hotel site, which would have to relocate). Provisions for keeping rents somewhat reasonable are also in the suggested development agreement, potentially locking in CPI-only rent increases for three years, and then ensuring “below market” rents for current tenants into the future. The City does forecast however, an annual quadrupling of income from the space in overall public revenue from the current $732,000 to $2,985,000. The developers would wear the costs of revitalization.