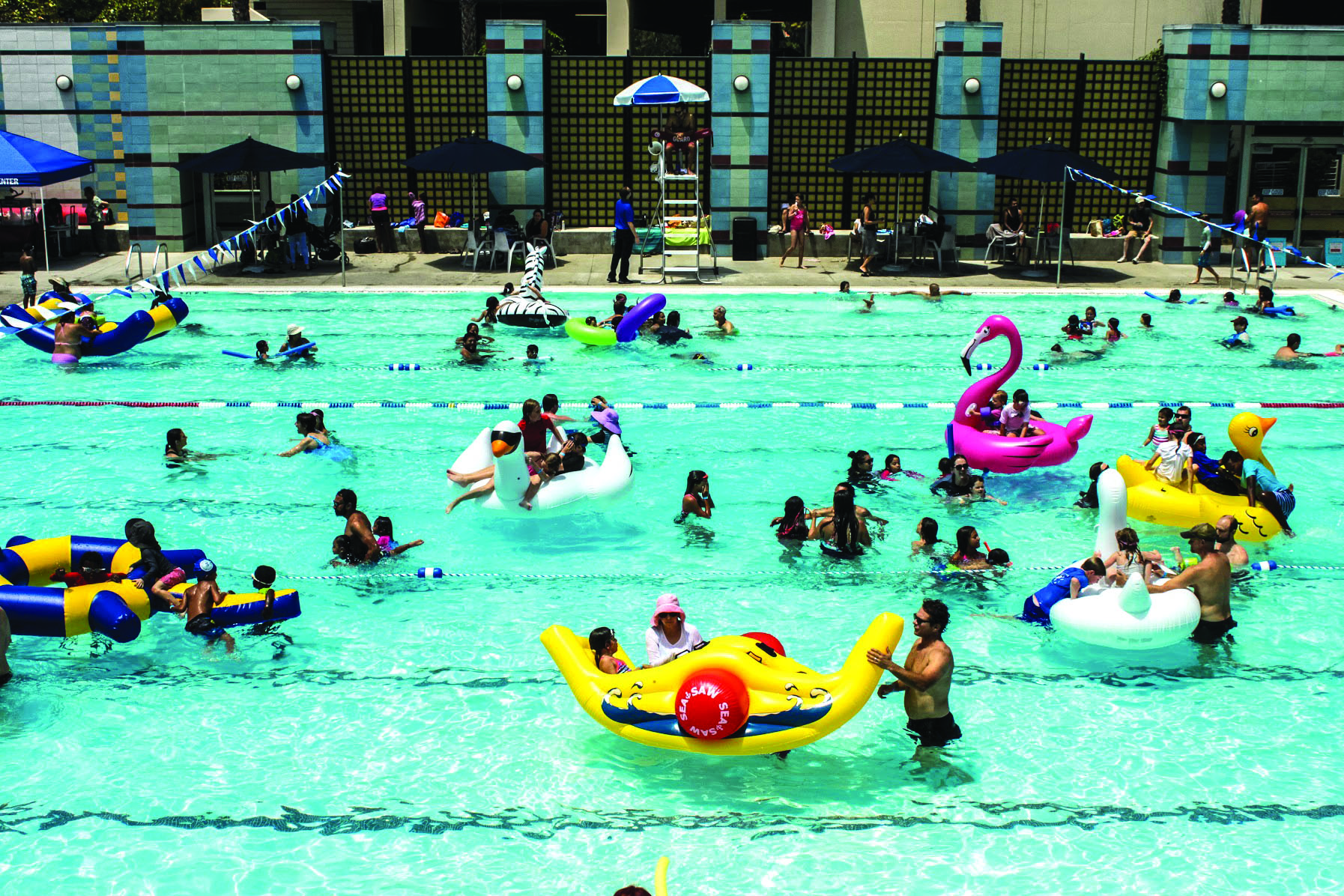 The Santa Monica Swim Center hosted its 15th Year Celebration Saturday with a day of fun in the sun and aquatic recreation for the residents of Santa Monica and neighbors of the community. Amy Cramer, Santa Monica’s Principal Supervisor of Aquatics was at the facility welcoming swimmers of all ages during this momentous day. From giant pool inflatables and over-sized board games, to free snow cones and a photo booth, the celebration brought together young swimmers and swimmers that are young at heart. The afternoon was complete with a live deejay and plenty of youth and families utilizing both the Fitness Pool and the Splash Pool.

Typically, the Splash Pool is utilized for swim classes, including “Parent and Me” and introductory swim instruction for young swimmers (and adults too), however during the anniversary celebration the Splash Pool was transformed into an “aquatic inflatable zoo. The vibrantly colored floating pool toys were distributed by Amy Cramer to eager swimmers. The shapes and sizes of the pool toys varied, from animals to objects – swans, ducks, sea-saws, noodles, and fish.

Several yards away in the fitness pool, a floating obstacle course occupied several swim lanes. While competitive and seasoned swimmers complete laps in the other lanes of the pool, a line of youth (and some adults) is formed to take part in the floating island challenge. Cheers and applause are given as people complete the obstacle course.

Further down the pool the swim lanes are equally active, as is the diving board. Michael Ashton, is one of the attendees of the celebration, and regular swimmer at the Santa Monica Swim Center. He is at the pool with his wife Sara and their two children Wilder and Alma, he says that having access to the facility “is a game changer…it is an incredible place to come burn some energy, and stay out of the heat, it has something for everybody.”

On July 22, 2002, the Santa Monica Swim Center, located at 2225 16th St., opened its doors. Fifteen years later, it has become a place for residents to splash, dive, exercise and learn to swim. The facility’s 15th year celebration was held in conjunction with a city-wide initiative honoring Parks Month. #SaMoParks