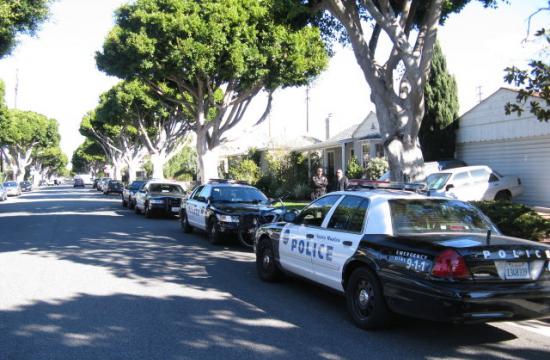 On Wednesday, June 28, at 9:26 p.m. officers of the Santa Monica Police Department received a call informing them that an attempted carjacking had occurred in the area of Fourth Street and Wilshire Boulevard. The officers hastened to the scene and while they were en route learned that the victim had been sitting in her car at a red light at the intersection of 11th Street and Wilshire Boulevard when the suspect had approached the front of her vehicle. The officers were told that the suspect had then walked around to the driver’s side of the car and attempted to open the driver’s door, but that it was thankfully locked. At that moment, the officers learned, the suspect became angry and yelled repeatedly for the woman to get out of her car. The woman, although being startled and frightened remained inside the car and refused to open the door. The light changed and the victim was able to drive away and call the police on her cellphone. Based upon a description of the suspect other officers who had been alerted as well spotted the suspect in the area of 18th Street and Arizona Avenue. These officers detained the suspect and after the victim had positively identified the man the officers arrested this 27-year-old Los Angeles resident and he was later charged with carjacking and a violation of parole. Bail was not granted.

On Thursday, June 29, at 4:33 a.m. officers of the Santa Monica Police Department responded to a call informing them of a case of possible vandalism involving cars that were parked in the beach parking lot next to the Santa Monica Pier. Officers rushed to the area and as they arrived they spotted a man who fit the description of the suspect and detained the man. A few moments later a citizen who had witnessed the acts of vandalism positively identified this man as being the vandal in question. The officers investigated and determined that a City of Santa Monica Parking Lot employee had been sitting in the parking lot booth of Lot Number One South when he had spotted the suspect walk into the parking lot. The City employee said that he had witnessed this suspect remove a sharp object from his attire and proceed to use it to carve deep scratches into the paint of several vehicles that were parked in the lot. The officers were able to contact the owner of one of the vandalized cars and after confirming that the car was his and that it had been vandalized the officers asked the vehicle owner if he was desirous of a prosecution, to which he responded that he was indeed desirous of a prosecution. The officers arrested the suspect, a homeless man aged 39, and he was charged with vandalism. Bail was set at $500.