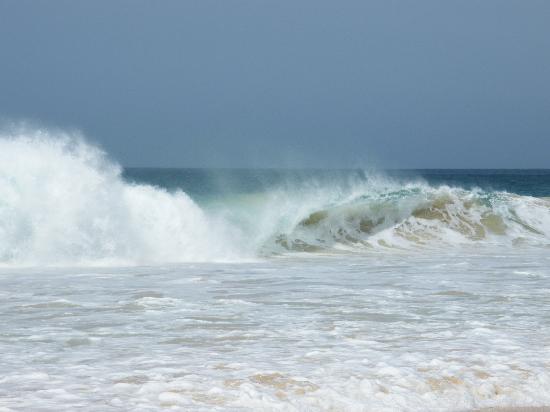 Forecasters blamed the high surf on a moderately long period southerly swell generated by former Hurricane Eugene, which is now a tropical storm off the coast of Baja California.

A beach hazards statement was scheduled to be in effect until 6 a.m., when it will be replaced by a more serious high surf advisory that will expire only at 10 p.m. Wednesday.

Surf of between 5 and 8 feet is expected from Tuesday morning through Wednesday evening, with the highest likely across south-facing beaches, including Malibu, Zuna and beaches on Santa Catalina Island, according to the NWS. Also expected are dangerous rip currents, a threat to swimmers and surfers.

“There is an increased risk of ocean drowning, especially with more people seeking relief from the hot inland temperatures,” according to an NWS statement. “Rip currents can pull swimmers and surfers out to sea. Large breaking waves can wash people off beaches and rocks and capsize small boats near shore.”

NWS forecasters advised beachgoers to swim near lifeguard stations. If caught in a rip current, remain parallel to shore until able to break free.

A mix of sunny and partly cloudy skies was forecast in Los Angeles Tuesday, along with highs of 77 in Avalon and at LAX; 84 in Long Beach and on Mount Wilson; 88 in downtown L.A.; 90 in Pasadena and San Gabriel; 91 in Burbank; 93 in Saugus; 95 in Woodland Hills; 96 in Palmdale; and 97 in Lancaster.

In several L.A. County communities, temperatures will decline marginally over the next three days before ramping up by a few degrees starting Saturday, but even those increased temperatures will not represent another heat wave, said NWS meteorologist Curt Kaplan, adding that forecasters tend to wait for temperatures to be around 10 degrees above normal before declaring that a heat wave has begun.

Sunny skies were forecast in Orange County Tuesday, along with highs of 71 in Laguna Beach and San Clemente; 75 in Newport Beach; 86 in Anaheim and Mission Viejo; 87 in Irvine; 88 in Fullerton; and 89 in Yorba Linda. Temperatures will be similar through at least Monday, according to the current forecast.