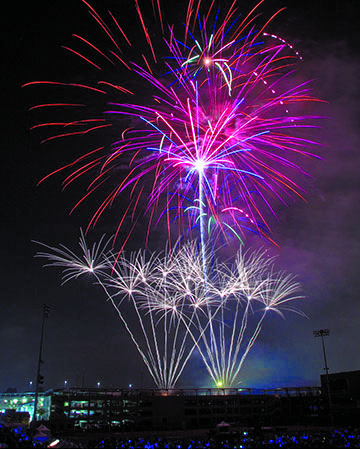 Santa Monica College’s annual Independence Day Celebration was held Saturday June 24. Considered the biggest, most sensational patriotic community event on the Westside, the event brought together a collage of picnic blankets, lawn chairs, and community members of all ages.

Thirty-Seven-year veteran Firefighter Michael Ayala (SMFD Station 5) told Scene that the Fire Department’s role at the event was to be present should something go awry with the fireworks, but also to “show the kids the fire engine [up close] and teach them about fire safety basics like ‘Stop, Drop & Roll.’” Ayala, a longtime resident of Santa Monica, brought his daughter to the event.

After a rousing chant of “Proud to be… SMC!” Jauregui turned the stage over to the Chris Mulkey Band for a set of Country Rock.

“We are a major part of the fabric of Santa Monica, hosting an event for the community is a natural thing to do; bringing families together in a safe environment,” said Jeffery.

The evening concluded with Fireworks by Pyro Spectaculars Entertainment, and oohs and ahh from those in attendance.