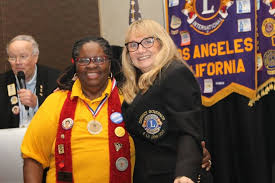 “Where there’s a need, there’s a Lion!” Lions Clubs International is the largest service club organization in the world. With 1.4 million members in 210 countries and geographic areas, Lions are everywhere – families, friends and neighbors who reach out to help wherever needed. They share a core belief: “community is what we make it.” With community, the good work that they do is magnified and becomes more powerful.

The Lions Clubs mantra is nowhere better characterized than in Santa Monica’s Carol Ann Emmitt, who has risen step by step through her 30 years in the Lions organization to reach the lofty position of District Governor for District 4-L3. Her installation in that post took place at the Lions Clubs International Convention in Fukuoka Japan in July 2016. Emmitt has proven to be one of the most dynamic leaders in the club’s history. It is interesting to note that she was one of the first women members ever to be inducted. She joined the Santa Monica Lions Club in July 1987, the same month that the LCI voted to amend their then 70-year-old constitution to admit women to this formerly “men only” organization.

The events of Emmitt’s life seem to draw full circles. She grew up in Easton CT, and traveled to California each summer to visit her grandparents, Anna and Joe Ruseski, in Santa Monica Canyon. She often accompanied her uncle to his job at the Jules Stein Eye Institute. She was fascinated with the scientific advancements they were developing to help the blind. She eventually moved to Southern California and has been an active member of the Santa Monica community since 1981. Becoming a Lion was a natural fit for Emmitt, as Helen Keller had challenged the Lions Clubs in 1925 to become “knights of the blind in the crusade against darkness,” so the organization often focuses their support efforts on vision.

In her District Governor’s Message in March 2017, Emmitt states, “Lions across the globe have demonstrated an unwavering commitment to service in their own communities for 100 years. It began with a narrow focus, vision, in response to Helen Keller’s challenge. We have evolved over the years and now provide many services that were neither identified nor understood a century ago.”

“Legacy and Leadership for the next Century” has been Emmitt’s motto for her term as District Governor. To accomplish this goal, Emmitt used her extraordinary power of communication and her talent for management to grow the Lions Club’s presence exponentially in her 4-L3 district. This district comprises 53 clubs in Southern California, including the Santa Monica Club. She recruited new members. She used her strength in public speaking to inspire current members to become more active. She visited businesses in areas where the organization was under-represented and established new clubs. She now has six new clubs in development, embracing 120 to 130 new Lions. And, she helped the current clubs in her district boost their collective membership by 80 to 100 members.

Emmitt developed a style that was approachable for each geographical area that she identified for a new club, bringing people together based on their culture and common interests. Then she spotted the movers and shakers in each group and encouraged them to lead. Her new clubs include the Inglewood City of Champions Lions Club (with a sports focus), the Los Angeles Dagachi (Korean word for Togetherness) Lions Club, the Los Angeles Empowering Lions Club, the West Hollywood Pride Lions Club and the Beverly Hills Lions Club. Emmitt identified talent and challenged people she knew would rise to the occasion. She believes the “the best leader is the one who inspires others to get the job done.”

Emmitt’s position as District Governor has spanned the year leading up to the Centennial Anniversary of Lions Clubs International. Her term as District Governor will end on June 30th of this year. LCI turns 100 years old the next day, July 1st. That’s the same day Emmitt celebrates her 30th Anniversary as a Lion. As her term as Lions Clubs International District Governor for District 4-L3 draws to a close, this inspirational and dynamic leader is just getting started. She will continue to spread her influence to all the clubs in her district and beyond, as she lives and breathes the compassionate spirit of “Lionism.” This concept of benevolence is a model the world needs desperately right now.