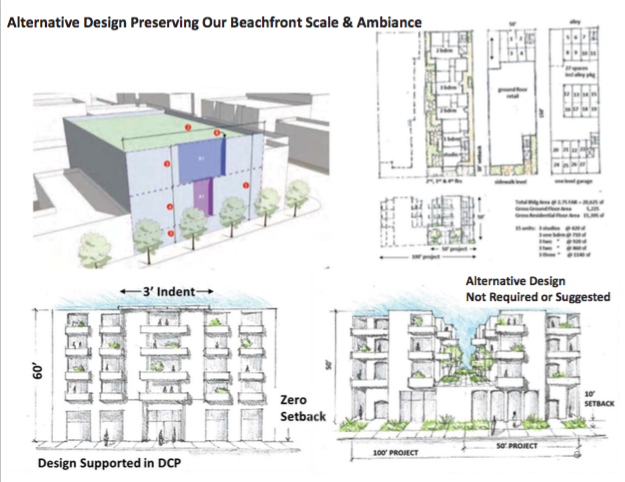 The city is for human beings, not for a race of giant men playing a new kind of chess.”

We’re a unique beachfront community and we should capitalize on that, not change it. The Downtown Community Plan (DCP) as proposed will likely have serious consequences for our city – it is not a plan, but rather a wish list for developers. It would substitute open sky and parks with tall buildings that will darken our streets and mire our downtown in gridlock.

The new DCP provides two options: 1) a 5-12 story high-rise downtown that focuses on commercial activity and office space with some low-cost housing; or, 2) a 3-4 story mid-rise downtown that is defined by its parks, promenades, city squares and cultural venues. The second option is clearly more aesthetically desirable and perhaps more commercially viable as well. Since tourism is a major source of City revenue, a revitalized downtown with an aesthetic sensibility, is a much better way to promote tourism than tall office buildings. A mid-rise city with parks, promenades, squares with public art, cultural and recreational venues would be a win for both residents and visitors alike. The alternative vision with high-rise offices, retail outlets and small apartments is a bet on the past and an invitation for a dystopian future. Let’s make sure council bets on the “right horse” as the DCP comes to a vote.

The new DCP doesn’t adequately address the root cause of traffic in our downtown- the overdevelopment of the office and retail sectors. Daily commuters overwhelm the few arteries and available parking structures. The result is gridlock that discourages both residents and neighboring communities from coming into the heart of our City.

For better or worse, our City is the last stop before Pacific Coast Highway. Most vehicles therefore get off the freeway at either Lincoln Boulevard or 4th Street. Both exits create dangerous “back-ups” on the freeway and funnel cars into downtown on the two most congested arteries. It is a situation that does not offer any easy solutions and is likely to get worse as more development is added to this already dense, congested area.

If our downtown is to have more housing, the proposed park at 5th and Arizona, on City-owned land, is a necessity. It could be the only beacon of light, air and greenery in a sea of taller buildings. It would provide a venue for the City’s downtown children to play as well as a place for office workers, tourists and residents to dine and unwind. A large open plaza would also provide space for a city market, entertainment events or recreation opportunities.

The final version of the DCP makes some positive references to “open space” stating, for example, that one should not have to walk more than 600 feet to reach open air and public space. Unfortunately, these spaces, that are referred to as “POPS” (“privately owned public spaces”) are, as the name implies, held privately with restricted public access. Our city already has too many examples of these “public spaces,” which are often closed off to public use over time. A continuous pedestrian network with wider sidewalks, building setbacks, mid-block paseos, incentivized with tax and processing benefits, is a far better choice. The paseos would also provide places for small businesses to serve the downtown residents.

Santa Monica’s past has shown that the “market place” will not produce affordable housing on its own. Land and building costs, combined with a scarcity of housing in an affluent community, will cause housing costs to continue higher and out of range for many in need of shelter. In short, we cannot “build our way to affordability” solely by increasing our housing stock. The City is therefore left with only two options: 1) mandates that require existing or new projects to provide it and/or 2) City subsidies or funds to defray the costs or adequate City funds to provide it themselves (e.g. Community Corp.).

We need human scale in our buildings, streets and neighborhoods.

The human scale needed can easily be achieved with four stories, a 50 ft height limit, and a 2.75 FAR throughout the entire downtown. With an average 10 ft setback at sidewalks and 30 percent of the open space “envelope” open to the public realm, these buildings could be both more attractive and a better fit for family housing. Four stories is double the current average height downtown and would still be adequate to meet the goals of 3.2 million sq ft. of buildable area, enough for 2,500 apartments and 4,000 residents. Most importantly, this would preserve our beachfront scale and ambiance.

Our city has a rich history of courtyard buildings that open onto and connect with the public way. We treasure these buildings because they keep our urban environment at a more human scale and provide more open space and pedestrian accessibility.

We will close with a quote by Colin Stansfield Smith, a visionary British architect:

“It is not merely a question of creating a climate in which excellence in architecture and the collaborative arts can be achieved … a public authority (i.e. City Council) must itself be creative to the point where what it does is an inspiration to others.”

SMartIs the downtown a separate city where 90,000 plus residents who don’t live downtown are relegated to visitor status? Your decision regarding the DCP will be the legacy for our City and forever remembered, for better or worse. Please be the ones remembered for standing up to the moneyed interests and standing with the those who elected you to preserve our small beach community.