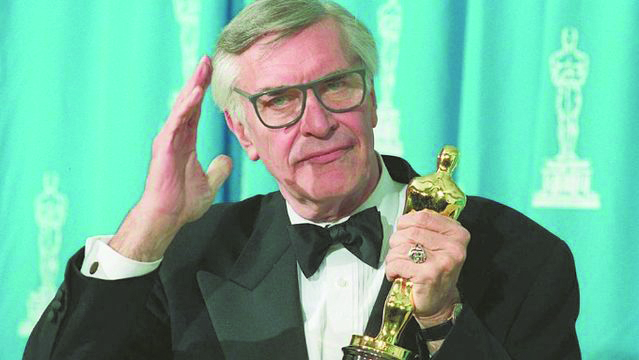 Actor Martin Landau has passed and I think his life and career say quite a bit about the term “working actor.” I’m recommending that actors and especially my own actor friends take time to read the obits and follow the often uneven path his career followed. Not always in demand and not always able to take the best or most artistic roles, Landau finally got an Oscar for his best supporting work in “Ed Wood” as, of all things, the struggling actor Bela Lugosi.

I want to share one moment where Mr. Landau overwhelmingly impressed me with his generosity and kindness. I have, over the years, recounted the story whenever people were talking about bad behavior or a lack of gratitude on the part of successful actors. The moment left me forever convinced that just because acting requires a certain amount of inner reflection and self-absorbed discipline doesn’t mean that one must inevitably live only in the realm of self.

Years ago I was asked to do something at an evening event during the Denver Film Festival because at the time I was performing regularly in Denver as a stand-up comic. Specifically, they wanted some presentational means of making a mention of all the sponsors contributing to the event and not just have somebody read it. That would likely be deadly. So I decided to sing the sponsor credits. That had every possibility of also being deadly; there were at least 25 sponsors.

But I connected with a great piano player and we arranged a sequence of very short song parodies that replaced the lyrics with funny business about the sponsors. Want a taste of this highly artistic concept? One of the sponsors was a French restaurant called La Coupole, pronounced (especially for purposes of my gig) “La Coo pole.” I sang about various entrees to the melody of Sam and Dave’s classic “I’m a Soul Man.” (The chorus: “La Coupole, man…”) It worked, nobody’s feelings were hurt, and that piano player was fantastic at shifting in and out of the melodies.

The guest of honor that evening was Martin Landau. I was a fan, especially of his work in Woody Allen’s chilly “Crimes and Misdemeanors” where Landau’s character literally gets away with murder. I was also of the generation that grew up watching Landau rip-off rubber masks after yet another successful deception on TV’s “Mission: Impossible” so… I really did need to meet him.

I had not been able to meet Mr. Landau before the event, charged through my portion of the evening, and later sought to shake his hand in the lobby after the show. In those days, pictures were taken mostly by photographers and there wasn’t the fever to get a selfie that would have pervaded the lobby scene had it taken place today.

But when I got to the lobby Landau was surrounded by a circular phalanx of well-wishers three or four humans deep and I was standing back, not wanting to contribute to the crush. I watched him as he engaged everyone seeking some contact, and was impressed by his gentle personality and openness. But alas, I was just too far away to make eye contact.

And then… Landau looked up, locked eyes with me and extended his arm through the crowd and even over the heads of a few folks much to their surprise. He looked me right in the eye and said, “You were terrific.” We shook hands and he slowly worked his way to the door of the theater.

It was not something he had to do; it was certainly not something that he had to say. His compliment so surprised me I just stood there for a moment, absorbing the reality that Martin Landau – “Mission: Impossible” team magician Rollin Hand – wanted to say something to me. He had flipped a short moment of encounter into something else entirely. Of course, I promised myself I would never forget it. There was no photo, not even a girlfriend to witness that exchange. But I have the memory, and I wanted to share it here despite the risk of a level of self-indulgence.

There it is again, that word “self.” We have been drowning in it since the election, even being encouraged to pay more attention to our national self-interest and put America first. We are drowning in “selfies” and our expanded and annotated existences on social media. Some are in up to their waist in a pool of self-improvement and finding inner self, which may bode well since these days it can feel as though a lot more of us will soon be self-employed. Martin Landau took a moment, while encircled by admirers, to reach far out of himself. I wanted to let you know that, years ago, this guy knocked me out by acknowledging what I then called “my work.” I deeply respected his work, but what lingers is that moment. I like to think that, for as many times as he peeled off a mask, that night I saw his real self. And that guy will be missed.