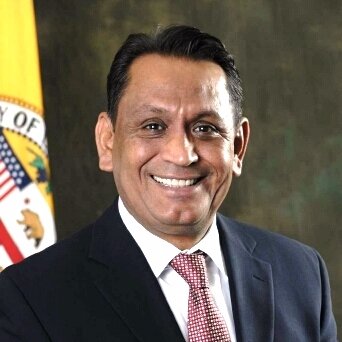 City Councilman Gil Cedillo Tuesday called for the release of a man who is facing deportation after being picked up by immigration agents while dropping his daughter off at school.

Romulo Avelica-Gonzalez was detained by Immigration and Customs Enforcement personnel while dropping off one of his daughters at Academia Avance in Highland Park on Feb. 28. He has lived in the country for 25 years and his case gained widespread attention with the dissemination of video footage taken by another of his daughters, who filmed the incident while sobbing.

“Justice delayed is justice denied. Mr. Romulo has been detained and kept away from his family for more than six months,” Cedillo said at a rally for Avelica-Gonzalez in downtown’s Pershing Square. “And as he is on the verge of being deported we stand here in unity and solidarity to make it clear to all those who are here, that we will fight for justice, that there cannot be justice until Mr. Romulo is released and returned to his family.”

Cedillo said in June it looked as if Avelica-Gonzalez was going to be released after two prior misdemeanor convictions for receiving stolen property and a DUI were both vacated by a judge. However, the Los Angeles Times reported Monday that he is still facing deportation and could be transported to Mexico as early as next week.

Cedillo, who has been among the council’s sharpest critics of President Donald Trump’s immigration policies, also said, “The criminals and those who should be deported are in the White House.”

Although Avelica-Gonzalez’s lawyers are trying various legal maneuvers to prevent his detention, an emergency stay of deportation ordered by the U.S. 9th Circuit Court of Appeals expires on Aug. 5, and Avelica-Gonzalez could be deported by Aug. 7, according to the Times.

“There is a very clear legal basis for this,” Cedillo said when calling for Avelica-Gonzalez to be released. “The concerns that were raised when he was picked up have been addressed.”