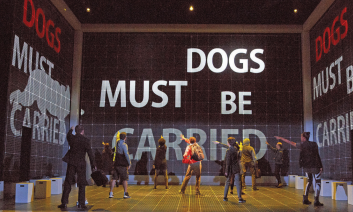 Once in a while, a play comes down the theatrical pike that dazzles all the senses. From Mark Haddon’s multiple award-winning book, comes the stage version of “The Curious Incident of the Dog in the Night-Time.” Magnificently adapted for the stage by Simon Stephens and masterfully directed by Marianne Elliott, the play is a spectacular theatrical ride.

The storyline revolves around 15-year-old Christopher Boone, a young man with autism, played by Adam Langdon, who delivers a spellbinding, mesmerizing performance. Our protagonist has a brilliant mathematical mind, capable of comprehending the most complex equations but cannot navigate some of the most ordinary aspects of life, including never touching or being touched by a human being. Touching is verboten, even by his parents, as such an innocent social act could catapult him into a screaming fit at which point he would roll up into the fetal position or beat his head with his fists, or recite a solution to a complicated mathematical problem.

Christopher’s life is turned upside down when he discovers that his neighbor’s dog Wellington has been stabbed with a pitchfork. The only living creature – besides his pet rat – with whom he is able to make physical contact, he becomes outraged, and makes it his life’s mission to find the culprit. His autism does not allow for guile or any indirect method of communicating, so he is blunt in questioning his neighbors asking: “Did you kill Wellington?” An officer investigating the murder touches Christopher, who immediately strikes him. Later, when being questioned by another officer because of his “assault,” the young man says he isn’t sorry because the officer touched him. His innocent directness injects much humor into the proceedings.

Understanding his boundaries in dealing with his son, Christopher’s dad, tenderly played by Gene Gillette, tells him that his mother had a heart attack and died. This is yet another trauma for Christopher. By and by he discovers letters from his mother that his father has hidden from him. It turns out she is alive and well and living in London with Mr. Shears, husband of their neighbor Mrs. Shears, and owner of the deceased Wellington. Despite his handicap, Christopher decides to take a train to London and his hair-raising adventure begins.

The train station scene is only one example of Tony Award-winner Finn Ross’ mind-blowing video design seen throughout the play. It is in this particular sequence that we truly see, through the hundreds of floating, intermingling images, the confusion inside Christopher’s complex brain as he tries to make sense of the overwhelming chaos in dealing with something as ordinary as a train schedule. Eventually, despite the physical and mental restrictions inherent in his autism, Christopher does find his mother and there is a most fascinating raison-d’être.

Director Elliott has put together a sterling supporting cast, which includes Maria Elena Ramirez as Christopher’s teacher Siobhan, Amelia White as the cookie-bearing neighbor, and Felicity Jones Latta as the mom. In addition to the superb acting, this production comes to life through an extraordinarily imaginative production team, which includes production design by Tony Award winner Bunny Christie, lighting by Tony Award winner Paule Constable, choreography by Scott Graham and Olivier Award winner Steven Hoggett for Frantic Assembly, music by Adrian Sutton, and sound by Ian Dickinson for Autograph.

Under Elliot’s direction, we witness a more “abstract” style of theatre where the actors use “sense memory” to create objects, with small set pieces rearranged by the actors to signify a location. Occasionally one of the actors is actually used as a set piece such as a chair or a couch.

This show became the longest-running play on Broadway in 10 years, winning five Tony Awards, six Drama Desk Awards, five Outer Critics Circle Awards, and the Drama League Award for Outstanding Production of a Broadway or Off-Broadway Play. The reason? It’s a highly stylized, engaging play that will connect with all your senses – a theatrical, life-affirming experience that you absolutely should not miss.

P.S. Be sure not to leave after the curtain call, as there is yet another exciting surprise awaiting you.