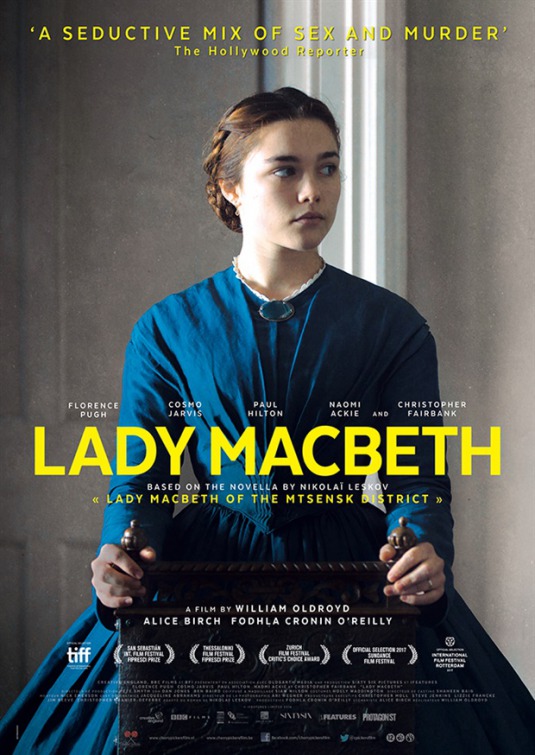 Beginning with a fascinating screenplay by Alice Birch and pitch perfect direction by William Oldroyd, this is not Shakespeare’s 16th Century Lady Macbeth.

Lady Macbeth is considered one of the most powerful female characters in literature. Although her behavior is ruthless for much of the play, eventually she feels some guilt when she tries to cleanse her hands of Duncan’s blood as expressed in her infamous “Out, damn’d spot! Out, I say!” One cannot say the same of her in this version.

Oldroyd’s riveting film is based on the 1865 Russian novella “Lady Macbeth of the Mtsensk by Nikolai Leskov” and takes place in a remote region of England in 1865. In the opening scene, we see a veiled 17-year-old Katherine, brilliantly portrayed by Florence Pugh, waiting in a stark church to marry 40-year-old heartless Alexander, wonderfully played by Paul Hilton. Alexander’s mean-spirited father Boris, a prosperous mine owner, (excellently portrayed by Christopher Fairbanks), purchased Katherine from her father along with a piece of land, and arranged this marriage. The wedding night is unconsummated, with her cold husband’s only request that she take off her nightgown and stand naked. Subsequent similar requests culminate in his masturbating in front of her naked body.

Forbidden to leave the house, Katherine spends her days mostly staring off into space, becoming more and more restless. Her only contact is with her devoted servant Anna, superbly played by Naomi Ackie, whose performance could serve as a master class in how to create a role without much dialogue. Her non-verbal reactions fill the screen with palpable emotions. By and by, the young wife’s husband and father-in-law are called out of town. At last, Katherine is alone in the house, and contrary to her explicit instructions, the defiant young bride immediately ventures outdoors to breathe in fresh air.

It is this exploration of the property that leads to her meeting one of the farmhands on her husband’s estate. She then begins a torrid love affair with the extremely sensual Sebastian, played convincingly by Cosmo Jarvis. This wildly sexual liaison unleashes her overpowering strength and like her “namesake,” she becomes ruthless in taking any action to preserve her affair, and subsequently to preserve herself.

Her father-in-law returns, and confronts Katherine about her affair, which he says everyone is whispering about. Sebastian is badly beaten by Boris, who locks him in the stable.

Revealing more and more of the callousness that lies beneath her seemingly calm surface, Katherine plans revenge against her father-in-law, which culminates in a scene that is quite chilling. I’ll leave it at that. But alas, just as Sebastian moves back into the house following a prolonged absence, Boris returns. In an act of defiance, Katherine flaunts her sexual behavior with Sebastian in front of her husband, who savagely attacks him. Katherine intercedes and that’s the end of her cold-hearted, rather cruel husband. Are you keeping score of the bodies?

Once again, Sebastian moves back into the house, and just when he’s become the man of the house, along comes Agnes, well played by Golda Rosheuvel, with seven-year-old Teddy, nicely portrayed by Anton Palmer. It is revealed that the child is Alexander’s illegitimate child. Back to the stables goes an unhappy Sebastian and a furious Katherine. The child now stands between Katherine and Sebastian living openly together and some extreme action must be taken.

Like Shakespeare’s Lady Macbeth, there are no bounds to Katherine’s ambition, cunning, resolve and ultimate betrayals. Sebastian is much weaker than Katherine but despite his subsequent confession that he and his lover suffocated the young child, no blame is laid on her and he anAd Anna wind up holding the proverbial bag.

Thanks to an excellent production team including Director of Photography Ari Wegner and Production Designer Jacqueline Abrahams, visually this is one stunning period film. Some scenes are reminiscent of the long, lingering shots used by renowned Swedish auteur Ingmar Bergman. Oldroyd effectively uses this technique to establish the initial hopelessness of Katherine’s life until she defiantly sets herself free from those smothering restrictions.

Once again, unlike Shakespeare’s Lady Macbeth, this Lady will never utter the famous guilt line: “Out, damn’d spot! Out, I say!” for Katherine has no remorse for her evil acts. In the end, she is back where she started – hopelessly, truly alone.