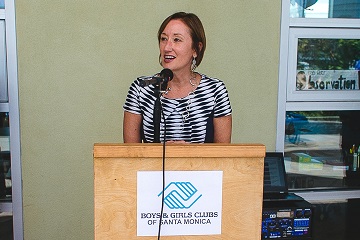 Salomae Kpohanu’s mom used to teach her that when you receive something, you have to give something back.

Kpohanu had a chance to do just that earlier this month at the Boys & Girls Club of Santa Monica (BGCSM), when as part of U.S. Bank’s Community Possible Month of Play she and other employee volunteers delivered a $50,000 donation in the form of a fresh paint job, upgraded flooring, a new air hockey table and 17 new computers for the club’s learning center.

A lot has changed since Kpohanu, 31, was a BGCSM kid. The clubhouse is now on site at John Adams Middle School, instead of several blocks away. Students play whichever game they like on the club’s sport court, instead of just tetherball. And the computer lab is primarily used for homework, instead of AOL Instant Messenger – which she said is a big part of why it was so meaningful to donate the computers.

“You don’t want to be left behind,” said Kpohanu, referring to both technology and opportunity.

That’s what BGCSM is all about: helping young people reach their full potential. This year, 100 percent of its members graduated from high school, compared to 77 percent of Los Angeles Unified School District students. Eighty-five percent of parents said their children have improved their school performance since getting involved with the organization.

“The Boys & Girls Clubs of Santa Monica provide thousands of young people with diverse, enriching opportunities that translate to great futures,” said Michelle Arellano, CEO of BGCSM. “We are truly grateful for the generous support of U.S. Bank, not only for the $50,000 donation but for the time and labor of volunteers like Salomae who made this project possible.”

Kpohanu continues to draw from her BGCSM years in her role as a performance coach at U.S. Bank. She says the club brought out her outgoing and talkative personality, and often made her step outside of her comfort zone. “When there’s discomfort, there’s growth,” she tells bankers these days.

Having grown up multiracial in a predominantly white neighborhood, hanging out with kids from all walks of life also broadened her world view. “It helped me speak up for myself but, more importantly, for others as well,” she said.

Kpohanu cherished the opportunity to share her experience with current members, chatting about job aspirations, music and crushes as they painted a mural designed to represent Santa Monica’s close-knit community of children and adults striving to make a difference. As the students headed home, they gave Kpohanu and each of her fellow U.S. Bankers a handmade thank-you card.