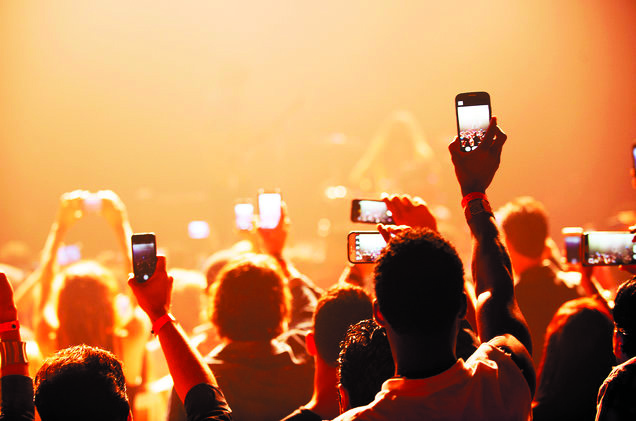 `Let’s be straight with each other at the top here: Not everyone can sit still. Sure, children are never expected to attend a birthday party where the main entrée is sugar and then sit in a circle and gently croon “Kumbaya.” We expect them to fidget, to be restless during car and plane travel… to be unable to be still except in sleep mode.

My concern is with adults. It’s been easy for critics to posit that the generation that grew up on iPhones and laptops and pads cannot be expected to separate from their screens long enough to listen to a live performance by Yo-Yo Ma. But I’m not thinking of them here. I’m thinking of us, the giant demographic of boomer and 50-plus adults who now appear unable to bond in any Zen-like way with live experience unless it has multiple platforms of keep busy actions and even interactivity.

The easiest example would be any live music performance. What I note about my generation is that they love revisiting their rock and pop idols at live performances with ticket prices that often begin at over $50, and then while there with the live music of their lives… they are preoccupied about either the next thing (“We should leave before the encore and get on the freeway…”) or some dimension of proving they were there that will be more trustworthy than their own sense memories, especially a souvenir t-shirt or some amount of post-able content they’ve captured on their phones. This is way before you get to the buying of food or snacks, which can create sensitive moments such as one person saying, “I love this song” and the other replying “Me too. I’m going to go get some beers.”

None of which would be that unusual except that the baby boom generation continues to put a high value on experiences of meditation, self-reflection, and quiet stillness to reflect internally. It seems that finding that level of Zen mellow doesn’t apply to live entertainment. Now the imperative is to “rock,” whatever form that might take.

All good, unless your way of taking-in a live music event tramples on mine. Let me cut to the chase: If I am sitting in the dark at a superb venue like Royce Hall at UCLA or the cool summer evening air of the Ford Theater, I don’t want to have the white glow of your iPhone in my line of sight. No, seriously, you don’t have to have it out. You can actually turn it off and sit still watching fine musicians produce live music, something that is increasingly taken for granted in our time of digital music players and stage shows where pop stars grind away to pre-recorded tracks.

Easy enough for me to say or crab about; a whole other thing for someone well into middle age to understand and accept. The evidence is overwhelming. Count ten people walking on a busy sidewalk. Now subtract those looking down at their phones. Even the classic boomer music generators The Eagles filed a depressing report on this in 1994 with their song “Learn to be Still”: “You thought you would be satisfied/but you never will/learn to be still.”

And now what to make of the fad of fidget spinners; little spinning toys that whirl between one’s pinched fingers and provide something akin to a baby pacifier for those who can’t sit still. Initially marketed as “toys” for children, a quick visit to YouTube will verify that adults are using them and paying as much as $120 or more for spinners crafted of metal with high tech ball bearings. Fidget spinners have come on so quickly I’m not sure we have established any rules of etiquette for their deployment. Do you spin your fidget while on the phone or even when talking to someone face to face? Does that say, “Sorry, but talking and listening to you simply are not enough for me. I need my hands to be doing something. And this is much safer than when I used to open and close a jack knife…”

Or maybe click a ballpoint pen over and over. Or snapping your gum. At least those activities take place in the real world. Want something to worry about as you approach your next birthday? Ask yourself if your Golden Years are going to be occupied with watching virtual reality “experiences” on headsets provided by the Pleasant Valley Retirement Community, a facility advertised to your children as modern and filled with wonderful devices to keep Mom and Dad’s restlessness at bay forever. Perhaps by then we won’t even need our hands because we’ll be able to activate fidget devices with our minds. “If I just rub my skull against the table, the virtual goldfish swim faster in the big screen tank.”

Admittedly, one way I deal with my own restlessness is by writing about yours. That’s probably not fair in a way, but I have long turned to my desktop “fidget toy” – my computer – for relief. I type my comments on Facebook as though there is actually something happening, some kind of universal connectivity, occurring every time I do. I author works of theater and many times self-produce their presentation because, for one thing, I’m too restless to wait through the process of a theater considering my submission of a play. And by going right to the stage with the writing, I can interact with my actor friends and we can all post how great it would be if everyone would step away from their screens and set down their fidget toys and sit still in a dark theater long enough to watch and ingest our work. Because the play – the live creation of drama or comedy on a stage – will only be occurring for a short while. Just like all other events in life itself. Of course it requires sitting still in the dark, lest it pass you by.