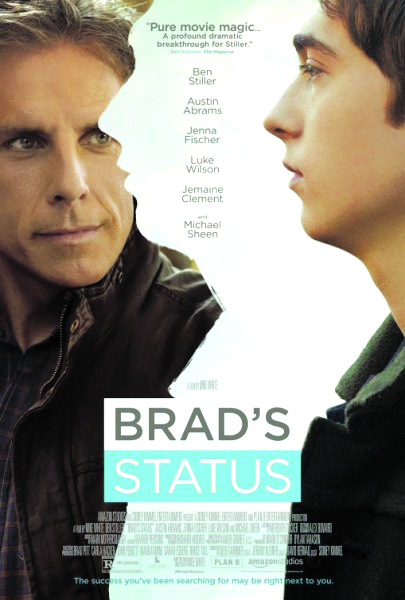 “Brad’s Status,” which stars Ben Stiller as the title character, centers on a father touring prestigious East Coast colleges with his son Troy (beautifully and subtly acted by Austin Abrams). The father is as anxiety-ridden as his son is calm and cool. Brad feels that he does not measure up with what he perceives are his wildly successful peers, leaving him envious and in doubt of his own accomplishments. He works for a non-profit, not exactly exciting in comparison to his friend Billy who lives in a Hawaiian beach house with two young girlfriends or Nick, a wealthy Hollywood producer. Brad’s wife, on the other hand, is perfectly happy with the comfortable life they have made.

While touring Harvard, Brad and Troy run into Ananya, a high-school classmate of Troy’s. Over dinner, the perceptive and idealistic Ananya, (who Brad finds fascinating) points out the white male privilege in Brad, which gets him thinking. She also says that she found Craig Fisher (a former classmate of Brad’s and a visiting professor at Harvard) to be full of himself and sexist, which also takes Brad a bit by surprise. Fisher is a published political author who has accumulated a lot of wealth and has many connections. Brad called Fisher to ask for some favors to help his son’s chances at Harvard. A dinner that Brad and Fisher have together at a restaurant turns out to be revealing to Brad.

The movie is narrated through Brad’s perspective via inner monologues, which I thought was an interesting technique, giving us an intimate feel of what the character is feeling and thinking.

The film is quite thoughtful and thought-provoking, a story about how we inevitably compare ourselves to others and the achievements they attain and how our self-worth becomes tied to that. Whenever we see Brad call one of his friends, he feels a sense of longing for an instant that he wishes he could have that lifestyle with fewer worries. His son, like his wife, reinforces that he in no way needs to compromise his ideals to try to become wealthier, even as Brad stresses about how he would pay for Troy’s expensive education.

One minor complaint I had with the film is that I felt the ending was too abrupt.

Abrams gives a naturalistic, believable performance, while Stiller gives an unsentimental performance that resonates. The interactions that they have ring true and also feel poignant. Their contrasting personalities complement each other nicely.

This is a movie that asks us to reflect on our experiences and to cherish what is important, a film that is not to be missed.