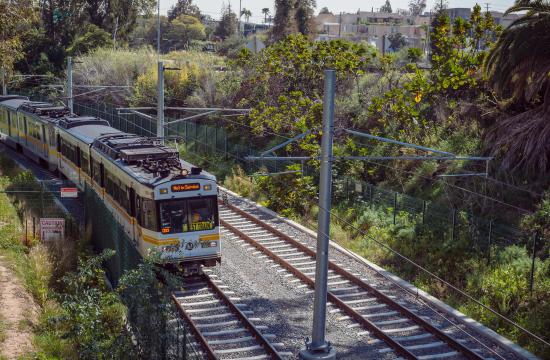 I did something very brave last weekend. I took the Metro BY MYSELF to meet a friend to watch the USC/Stanford game this past weekend.

My friend is a very nice guy I met a few months ago who lives in Anaheim. He has season tickets for the USC games. We don’t live very close to each other; I live in Westwood.

He proposed what he thought was the coolest idea; he would take Metro from Anaheim, and I would take it from Santa Monica and we could meet at the stadium!

I thought to myself; holy crap! I’ve never taken the Metro. Especially alone. In fact, in my 50-plus years, I’ve taken public transportation only a few times in my life, and most of those trips were on the shuttle buses to the Hollywood Bowl!

I decided to “man up” and agreed to the adventure. I had a tap card that AARP had recently sent to me and I put it in my wallet just in case, if ever there was a need to use it.

I drove to Santa Monica, the only location I was familiar with, and made my way down to the train station. I took a right turn where it said “no right turn”; it was the only way to get to the parking lot I wanted to park in. Sorry SMPD.

The 4 p. m. train had just pulled up to the station; I quickly paid the parking attendant and trotted up the stairs to the train. I nervously got my tap card out of my wallet. What if it didn’t work? Where would I get a tap card? Would I miss the train? Thankfully I sailed through, my AARP tap card working flawlessly.

I boarded the train, and as far up front as I could. What kind of people would be on this train? Would I be the only one that was by myself? I clutched my handbag like my grandmother used to do when we took the subway to downtown in Chicago. At that moment, I felt like my grandmother.

People completed boarding the train. I looked around, sizing everyone up, mainly out of fear. My fear dissolved quickly; 90 percent of the people on the train were wearing USC t-shirts, hats and other Trojan paraphernalia. Whew! I felt safer.

The train started to move. The front seat that I had chosen was really the very back seat and I was sitting backwards! I quickly moved to a seat that was front facing.

I called my friend Walt several times; letting him know I was on the train, and asked him at least twice about which stop I should get off the train.

We started the journey to the Coliseum, making route stops along the way. I was beginning to relax, releasing the tight clutch I had on my purse.

The stops that the train had were cool – one was a station not too far away from my apartment in Westwood. I began to think of all the places I could go on the train, avoiding the crushing traffic jams that I encounter every day, just getting from Westwood to Santa Monica.

With each stop we were getting closer to my destination. No altercations. Good.

Two more stops, and I was supposed to get off and take a left. Or was it a right?

Turns out that in my excitement to make sure I got off at the right stop, I disembarked two stops too early. I walked through a city of tailgaters, past the museums, and finally arrived at the Rose Garden and the fountain where Walt had indicated we would meet. I waited at our meeting spot a few minutes; Walt arrived soon thereafter.

As we made our way to our seats, Walt informed me that anyone who did not have a see-through purse needed to check the purse outside of the stadium. Are you fcking kidding me? After clutching my bag the whole time on the train, I had to check it? I ended up much less pissy when a guy from the purse check in area gave me a plastic bag for me to be able to carry my valuables. Like my makeup bag.

And by the way, USC kicked butt!