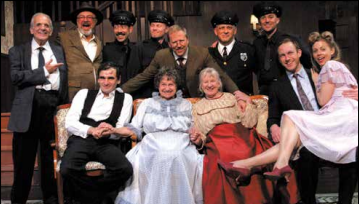 Playwright Joseph Kesserling first dreamed up his play “Arsenic and Old Lace” back in 1939.

It was originally conceived as a dark drama based on the true story of a woman by the name of Amy Archer-Gilligan, who took in boarders and then poisoned them for their pensions.

However, thanks to the genius of collaborators Howard Lindsay and Russell Crouse, they quickly turned the drama into a comedy and created the roles of Abby and Martha Brewster – two elderly aunts – who would do the requisite bumping off.

Roping in Boris Karloff as a lunatic killer to play the role of wayward Brewster nephew Jonathan, who is constantly referred to as looking just like Boris Karloff, was a stroke of genius. The show played to rave reviews and the 1944 Frank Capra film of the same name starring Cary Grant was also a massive hit.

And in 2017 at the Odyssey, the play has lost none of its luster, thanks to terrific ensemble casting and a deft hand by director Elina de Santos, who never lets the action flag.

It’s a joy to watch the pas de deux unfold between the murderous aunts, played to perfection by Sheelagh Cullen and Jacque Lynn Colton.

Their sweet, frail demeanors coupled with their genuine desire to help assuage their elderly boarders’ loneliness (by sending them into the next world with some potent elderberry wine), makes it impossible not to fall in love with them.

Alex Elliot-Funk as the hapless Teddy Brewster who thinks he’s President Roosevelt, manages to steer his character away from an all too easy caricature, so that his constant trips to “Panama” (aka the cellar), and his endless bounding up and down the stairs yelling “Charge,” are humorous, yet tinged with an element of sadness.

Nephew Mortimer Brewster, in the hands of J.B. Waterman, is a study in falling apart as he moves from disbelief to complete apoplexy when he realizes what the aunts are up to.

Gera Hermann as the mad murderer Jonathan Brewster is completely up to the task (and a fine Boris Karloff look-alike), when the plot thickens as he returns to the house with his own dead body.

As the mayhem ensues with Jonathan and the aunts trying to one-up each other on who has killed the most people, the cast comes together to ratchet up the comedy. Special mention to Michael Antosy as Officer O’Hara who just wants a literally captive Mortimer to listen to the play he’s written.

The beautiful tri-level set with period furnishings and props sets the scene perfectly, and subtle lighting and sound make for a wonderful two hours and 20 minutes at the theatre.

The cast of “Arsenic and Old Lace.”