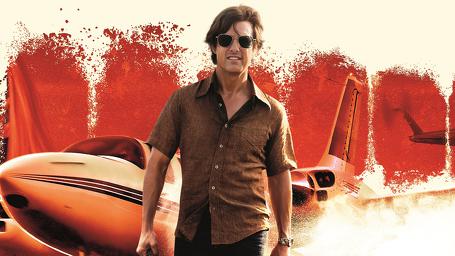 “American Made,” which is based on a true story, is a very entertaining movie starring Tom Cruise as a TWA pilot named Barry Seal, who first gets recruited by the CIA in 1978 to fly undercover for them and take surveillance photos in Central America. Domhnall Gleeson plays a CIA case officer named Monty Schafer who recruits him. Schafer gives Seal his own specially equipped plane to use for his covert missions, along with his own hangar.

Not long afterwards, Seal is approached by the Medellin Cartel to smuggle drugs into the U.S. on their behalf and accepts their lucrative offer. Despite the fact that he will be involved with seemingly violent criminals, including notorious drug lord Pablo Escobar, Seal has little qualms about taking the deal; he just wants to make sure that the runway in Central America is long enough for his plane. This is the first glimpse that Seal’s morals are questionable.

When Seal gets caught by the DEA on one of his drug smuggling runs for the Cartel and arrested, Schafer bails him out of jail and warns that his house will get raided. To avoid being there when this happens, Seal quickly moves his family out before dawn to a small town in Arkansas, a move arranged by Schafer. Seal’s wife and children are confused by what is happening, but as Cruise’s character is still undercover, he does not divulge why they have to suddenly pack up their things and leave.

With all the money flowing in, Seal is living the high life with his wife and children. His much younger wife Lucy, played by Sarah Wright, in a mostly thankless role for the actress, is not given much room to develop her character. Greed and excess are central to the storyline of Cruise’s character, who is always trying to get ahead. Things get messy for Barry’s operation when Lucy’s brother JB shows up unannounced at their new home in Arkansas. This uninhibited, slovenly young man with no discretion becomes a problem for Barry and creates major issues for his operations.

The film bears similarities to “The Infiltrator” with Bryan Cranston, which also features a protagonist who goes undercover and tries to win over those in the Medellin Cartel in their early years, going to great lengths to keep their true identities hidden.

Cruise is in top form in a role that lets him show off his boyish charm and confidence. He looks great for any age, let alone for someone in his 50s. Irish actor Gleeson also gives a good performance and pulls off a flawless American accent. This is a fast-paced film that never drags and benefits from the look and feel, which the cinematographer and production designer have gone to great lengths to convincingly evoke the era.