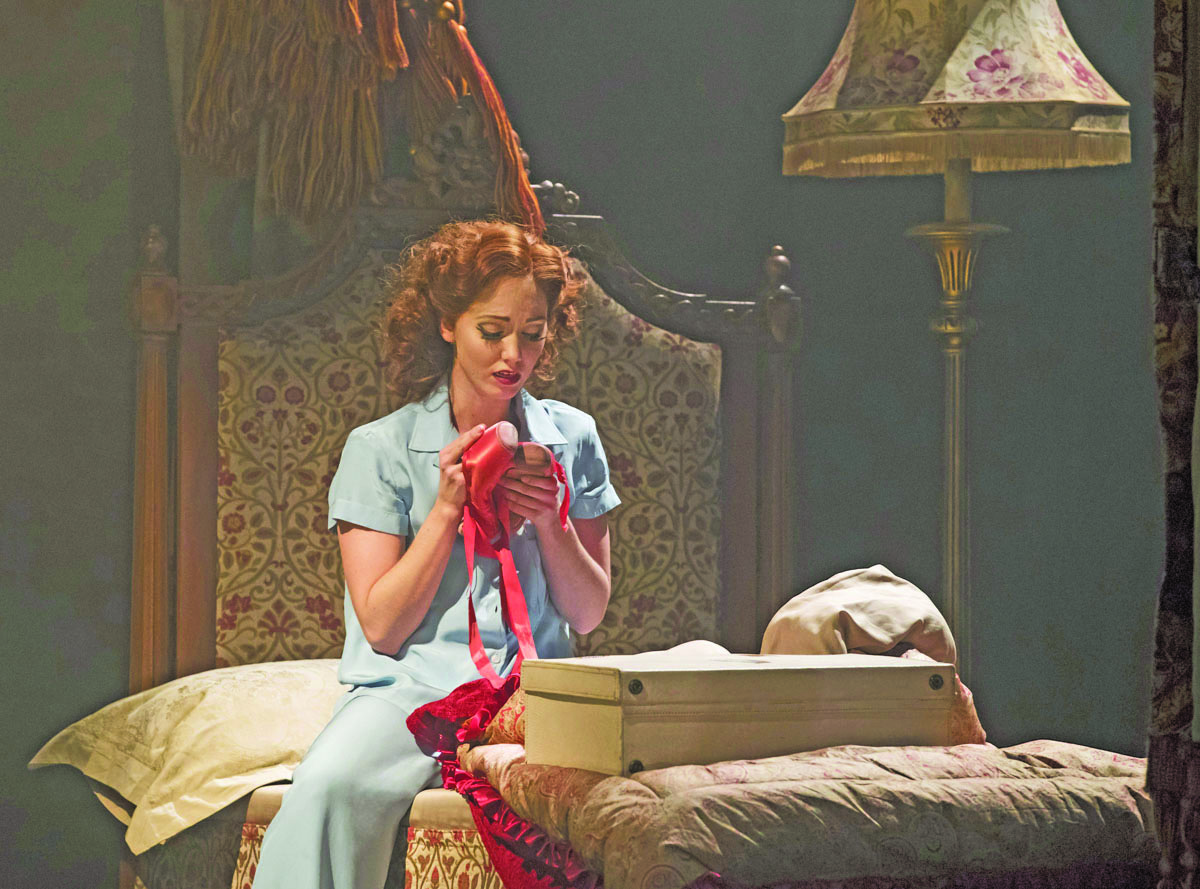 Ah. Ah. Ahmanson. You’ve gone and done it yet again. Following on the heels of the amazing production of “The Incident of the Dog in the Night-Time,” Matthew Bourne’s brilliant New Adventures Production* of “The Red Shoes,” is another eye-popping theatrical experience, staged with all the glitter, glamour, and extraordinary dancing that iconic story deserves.

Bourne, master director and choreographer, has magically and seemingly effortlessly transformed the 1948 memorable film by Michael Powell and Emeric Pressburger, based on the Hans Christian Anderson fairytale, into a staged ballet. The storytelling, as told through the exquisitely executed dancing, and superb production values, brings to life a fascinating tale about magic red ballet shoes that once worn takes over the dancer’s life resulting in dire consequences. The fairytale, which takes place in London and the French Riviera in the late 1940s, revolves around Victoria Page, exquisitely danced by Ashley Shaw, ** who becomes a member of The Ballet Lermontov. Her character is a rising young star who dreams about being a great dancer and falls under the spell of the magical red shoes. Under the tutelage of the Svengali-like ballet impresario Boris Lermontov, danced by Sam Archer, she is torn between her career and wanting to be with her lover, Julian Craster, a struggling young composer, danced by Dominic North. This is a story of ambition and determination to become successful no matter what the cost.

Rounding out the principal dancers of The Ballet Lermontov are Glenn Graham as Ballet Master Grischa Ljubov, Liam Mower as Premier Danseur Ivan Boleslawsky, and the most delightful Michela Meazza as Prima Ballerina Irina Boronskaja. In the scene where she injures her foot, Bourne’s comic bent is front and center and as befitting a true diva, he has several of the male dancers ceremoniously carry her off stage as she tearfully, but regally waves goodbye.

What is particularly compelling is Bourne’s combining en pointe classical ballet with modern dance, which calls for less fluidity and more angular isolation of body parts. There are fabulous scenes incorporating those competing styles, such as in a traditional ballet class, where the dance captain puts the company through their exercises as contrasted by a scene in a music hall in London’s East End where the movements are a highly stylized version of the Lindy Hop or Argentine Tango. Bourne retains the basic movements, but then takes them to a whole other dimension. There are scenes within scenes, one of which depicts a performance from the dancers’ point of view. They perform in front of footlights as they play before an unseen audience. There are so many delightful scenes but one that stands out in particular is the beach scene where the director uses beach balls as part of the fun dance sequence. One comes to expect comedy from director Bourne and indeed he delivers in once scene in particular where two dancers, dressed in Egyptian costumes, do an amusing routine, which was definitely a crowd pleaser.

Under Bourne’s masterful direction, his company of highly trained New Adventures dancers perform graceful movements, which are supported with the kind of excellent acting we tend to equate with staged-trained actors. It is an axiom that whether you’re a dancer or an actor or a painter, your technique should be so ingrained, that your work should appear effortless. In the case of this company, every movement is executed with such ease and precision that even walking across the stage has an elegant air about it.

The technical elements of this production are truly mesmerizing beginning with Bernard Herrmann’s exciting musical score with orchestrations by Terry Davies. The set and costume design by Lez Brotherston are truly a scrumptious sight to behold. His design of a lavishly draped on-stage proscenium is used quite effectively in aiding transitions from scene to scene. He dressed the dancers in a variety of costumes filling the stage with the vibrant colors of a painter’s palette. While Paule Constable’s lighting design enhances the action with his rainbow colors drenching the stage, Duncan McLean’s projection design will surely take your breath away as, for example, it simulates hurricane-force winds to which the dancers move and sway in a rhythm that matches the strength and intensity of a storm. Paul Groothuis sound design aids in segueing from such intensity, as we next see a night sky filled with millions of twinkling stars with the choreography now calm and fluid, a soothing sound reflecting the changing action.

I can’t think of a better way for you to spend your entertainment dollars than to treat yourself to this captivating evening of theatre.

*Matthew Bourne formed New Adventures in 2002. It is a British dance company dedicated to contemporary dance.

**Please note that some of the principal roles are double cast. The dancers in this review performed opening night.