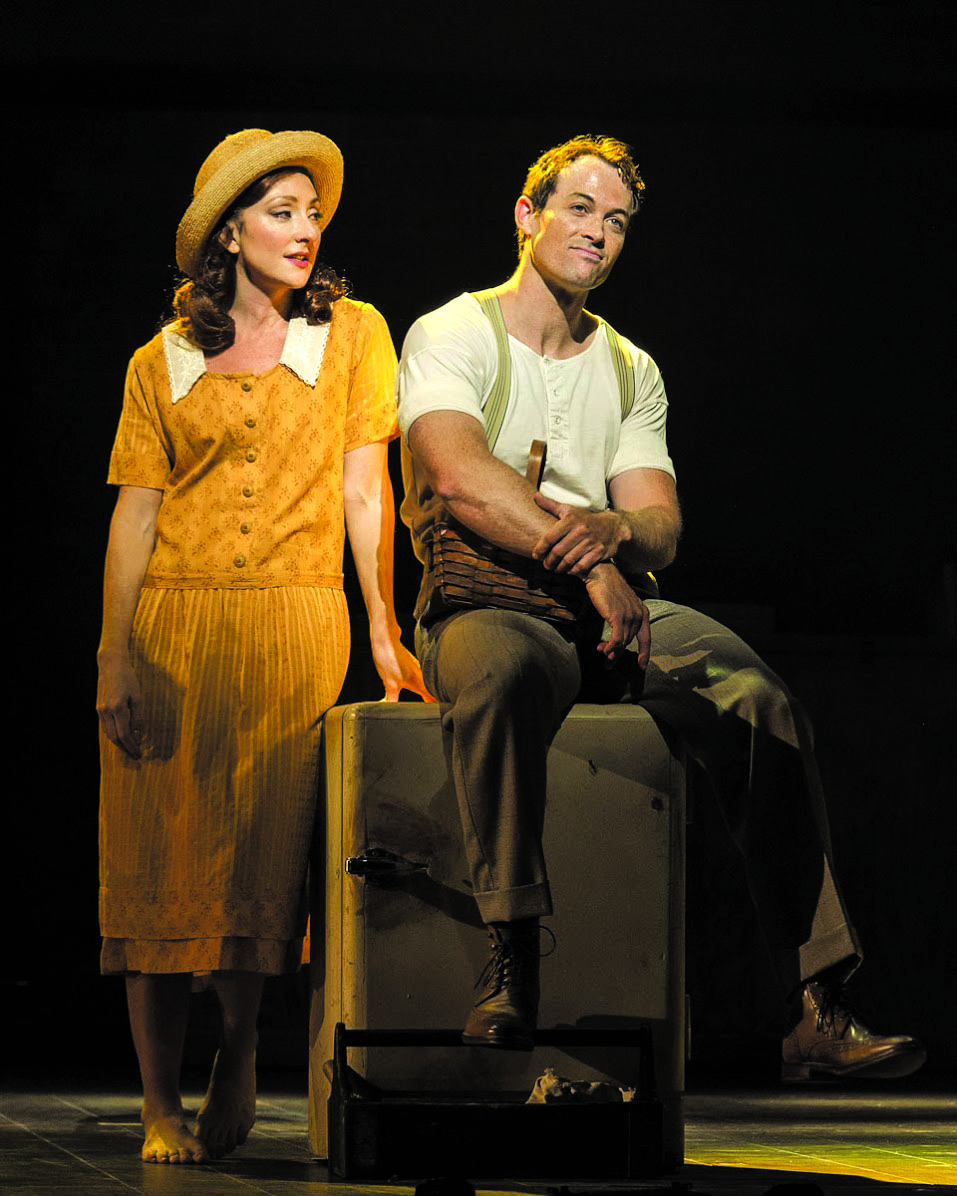 Kick me for being sentimental, but in view of the emotional bashings we are receiving daily in America 2017, Steve Martin’s foot-stomping Bluegrass musical score, along with his old fashion fairy tale love story, with music and lyrics by Edie Brickell, is a welcome respite from our daily strife. Martin is an accomplished banjo player, which is reflected in the Bluegrass, banjo-driven score. It’s happy music that reveals the narrative as sung by the gifted principal actors. Hokey? Sentimental? Maybe. But one might ask why “hokey” or “sentimental” is critically scorned. So, if the words, “once upon a time” are not your cup of tea, and you cannot believe that a frog can be turned into a prince with a simple kiss, or one shoe can change Cinderella’s destiny, then this outright down-home, old fashion musical is not for you. On the other hand, if you are willing to suspend your disbelief and go along for this musical ride, then you will have an enjoyable experience that will make you laugh and yes, you will even shed a few tears.

To the story: Under the skillful direction of Walter Bobbie, the action takes place in the Blue Ridge Mountains of North Carolina and spans two decades – one 1945-1946, the other 22 years earlier. At rise, it’s 1923 and we hear the opening number, “If You Knew My Story,” sung by the character of Alice Murphy, played by an amazing Carmen Cusack, a powerful combination of Tammy Wynette and Dolly Parton. Her clear as a bell, emotional voice soars easily into the higher registers as well as giving full value to her mid-range. Alice is ambitious, loves literature, and is strong willed. When asked by her father if she was questioning the lord, she replies: “I’m not questioning the lord, but sometimes my ideas are better.” The young Alice falls in love with Jimmy Ray Dobbs, beautifully played by Patrick Cummings, and they well, make a baby. When Jimmy Ray finds out, he’s ecstatic and wants to marry Alice. So as not to bring shame upon his family, Jimmy Ray’s father, Mayor Josiah Dobbs, played with just the right amount of obnoxious bullying by Jeff Austin, insists that Jimmy’s life would be ruined if he married her and forces Alice to be hidden away in a cabin in the woods. When the baby boy is born, in an act of unspeakable cruelty, Dobbs implores her father, played by Stephen Lee Anderson, to sign a document, which would put the child up for adoption. Don’t forget this is the puritanical Bible Belt so against his daughter and wife’s (Allison Briner-Dardenne) protests, her father agrees to sign the document and the child is ripped out of Alice’s arms.

We now fast forward to 1945. Billy Cane, played by a talented A.J. Shively, is back from World War II. The first thing he does is to visit his childhood friend Margo, played by lovely Maddie Shea Baldwin. She works in a library where someone just returned a thesaurus because he thought it was a book on dinosaurs. Billy is impressed with how beautiful she is but they are not quite ready to show their long simmering affection for each other. A devotee of Ernest Hemingway and F. Scott Fitzgerald, Billy wrote a number of manuscripts and is determined to become a successful writer. He tells Margo he is going to Asheville where he hoped to be published in the prestigious The Asheville Southern Journal. There he meets with the editor, a grown-up Alice Murphy, who catches him in a lie about a letter he supposedly received from a famous writer. She informs him that the writer actually died ten years before the date of his letter. He shrugs it off saying he’s just trying to get noticed. After reading his work, Alice recognizes his talent and hands him a check for $10 as payment for one of his stories, which she doesn’t intend to publish. She tells him to experience life and write. She mentions to her associate Daryl Ames, played by a very amusing Jeff Blumenkrantz, that the young writer: “Is a liar and that could make him a good writer.” Jeff keeps secretly submitting scripts under a non-de-plume with most of them ending up in the “circular file.”

Meanwhile, back in the mountains, Jimmy Ray’s father, who has forbidden his son to ever see Alice again, keeps trying to introduce him to proper young women who come from wealthy families. He explains that Billy must marry one of those eligible young ladies to keep the business going. Billy will have none of it and decides to go to Asheville to see if he can find his baby. Alice has never given up on her search but keeps hitting dead ends. Now old and sick, Billy’s father tells him that he will never find the baby because, well, think “Throw Momma From the Train,” and that will give you an idea of the despicable act committed by his father and where the story might go from there. The handbag scene in “The Importance of Being Earnest” might give you a clue.

The technical aspects of “Bright Star” are pitch perfect from Eugene Lee’s scenic design and Japhy Weideman’s lighting design to Jane Greenwood’s colorful period costumes, and Nevin Steinberg’s sound design. Working with a talented cast of singers and dancers, the choreography by Josh Rhodes was at times quite original and ranged from a fox trot to a spirited jitterbug. One couldn’t help comparing the hoedown sequences to Agnes de Mille’s work in “Oklahoma.” Even though they fit within the context of a particular scene, those movements did lack originality.

The narrative Bluegrass musical score, played with gusto by the orchestra under the music direction and conducting by Anthony de Angelis, includes such songs as “Bright Star,” “Way Back in the Day,” “A Man’s Gotta Do,” “I Had a Vision,” and “At Long Last.” All the musicians are talented but a stand-out performance was given by Martha McDonnell, whose soulful violin solos punctuated the sometimes sadness of a particular scene as well as aiding in scene transitions.

“Bright Star” is an old-fashioned, rather sentimental story so you have to be willing to accept it on its own merits. If you do, you will love the fairy tale ending, “And they all lived happily ever after.”