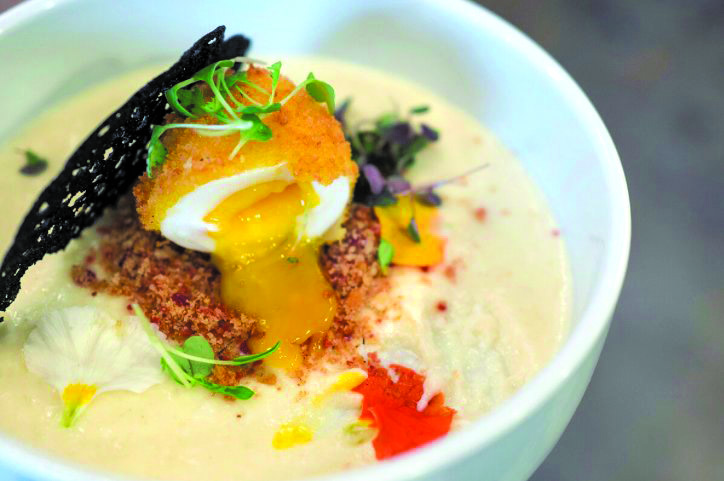 I recently was introduced to a cool, new little restaurant near Broadway and 2nd. One of my friends did the construction on the place and told me to check it out.

The place is called Air Food. Huh? Food that tastes like air? Didn’t get it. So I went to check it out. It’s a tiny place, with maybe six tables, an open kitchen with a few more seats around it, and a few more across from the kitchen.

The dinner menu looked amazing. Very French. While reading the menu, some of the dishes that called my name were Le Nem, a crispy egg roll filled with goat cheese and spices. Another is the Le Foie Gras, homemade Foie Gras from Hudson duck, infused with Cognac and Sarawak pepper. And those were just the starters.

Main dishes that stood out for me were La Pate, sautéed Tagliatelle with squid Spanish chorizo, Parma ham from Spain, pickled veggies and Saffron. Even though I am not Vegan, the Vegan Lasagna and grilled Tofu with marinated Arrabiata sauce and truffle oil. The duck breast from France is served with a simmered fig sauce, and accompanied with English-style potatoes.

I liked this menu. Really different than most I’ve seen in Santa Monica. And, it in a cool, casual environment that is unlike many French restaurants. The prices are pretty decent as well. Starters, well start, at $9, and main dishes average about $22.

All this is awesome, but the most interesting menu item is the collection of waters that are offered. Yes, that’s right, bottled water from all over the world. We’re talking Wales, South Pacific, New Zealand, Norway, Scotland, Spain, France, Canada, Argentina, and more.

I think I counted 30 different kinds. They are all priced around $5-$10 a bottle, but there’s one that stands out. It’s a water from Iceland priced at $25 a bottle.

The name is Veren, and is described as a unique kind of water, derived from Icelandic air vapor (ah that’s where they got the name of the restaurant; Air Food.) This makes the water perfectly clear, devoid of minerals like most waters. With a production of less than 40,000 bottles a year, this is luxury drinking water at its finest. Who knew?