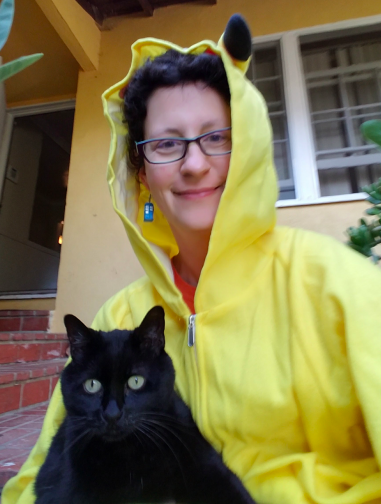 Jennifer was born on March 31, 1977, to Erhard and Patricia Hofmann in Chatsworth, California. Jenn began planting the seeds of many of her life’s great loves— Theater, literature, learning and general fandom— early in childhood. After moving to Beaumont, she skipped the first grade, set the District Spelling Bee record, and graduated Valedictorian of Beaumont High School in 1994.

In 1998, Jenn attained a Bachelor of Arts in Classical Studies from UC Riverside, where she began her teaching life at The Princeton Review. At UCR she met Michael Pust. Jenn and Michael were married in San Diego in 2000. Jenn taught English at Mission Bay High School for 5 years before finding her home at Santa Monica High School in 2006. There she would become chair of the English Department, a published scholar, a recipient of the 2015 Yale Educator Award, and would mentor numerous students into higher education and the greater world of words.

In 2008 and 2012, Jenn’s sons, Noah and Nathan, were born, and she was able to bring her unparalleled passion to the art of raising two incredible boys with Michael. In 2015, Jennifer was diagnosed with a rare form of breast cancer.

She shared the experience of her illness openly with friends, family and the public, in the hope that her perseverance might help others. Jenn died on October 29, 2017.

It was impossible not to laugh when Jenn laughed, to listen as she sang the praises of everything she loved in life, or to be swept along by the joyful force of her enthusiasm.

She will be deeply missed.