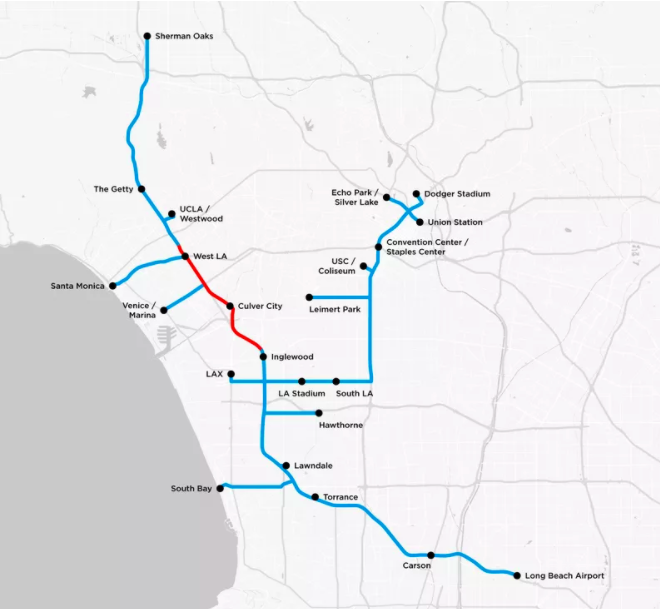 Should Elon Musk’s Boring Company ever get the technology and the regulatory approvals in shape to move forward with building a network of tunnels underneath Los Angeles, now we know what that system might look like.

The company recently published a map on its website detailing the first proposed routes. The longest artery stretches about 40 miles from the Sherman Oaks neighborhood, located north of downtown Los Angeles, to Long Beach Airport, which is in the southeastern corner of LA county.

This primary path more or less traces the same route laid out by Interstate 405, and would feature smaller tributary tunnels running off to Santa Monica, Venice, South Bay, Los Angeles International Airport, and Hawthorne (where SpaceX and The Boring Company are headquartered). A second route would run east-west from LAX to south Los Angeles, before following State Route 110 north through downtown and ending at Dodger Stadium.

As learned in April when Musk first showed off the concept behind The Boring Company, the plan for these tunnels is to solve Los Angeles’ famous automotive congestion by moving some of the traffic flow below ground. But they’re not just empty tunnels; instead, a car on the surface would dodge traffic by taking a sort of elevator down, which would then move as a “sled” through the tunnels at speeds of 150 miles per hour. Bus-like “pods” would move non-car owners around the city, too.

The company stresses in the caption for the map that the initial routes are a “concept,” not “a finalized alignment.” The part highlighted in red represents a 6.5-mile stretch that the company wants to use as a “proof-of-concept” tunnel. There, it would perform verification tests of all the necessary systems, like the car sleds that will whisk riders to their destination, but also the equipment and processes being used to build the tunnels in the first place. The company calls this the “Phase 1” section of the tunnel, and says it won’t be used by the public until it is “deemed successful by County government, City government, and The Boring Company.”

Back in August, The Boring Company won approval from the Hawthorne, California city council to dig a two-mile-long test tunnel under the city streets that surround its headquarters. While that tunnel seems to be coming along nicely, the company has also shared a test video of one of the sleds in action, as well as a demonstration of the elevator concept.

In July, the billionaire CEO combined two of his concurrent transportation projects when he tweeted that he received “verbal govt approval” to build an underground Hyperloop that would connect New York City to Washington, DC.